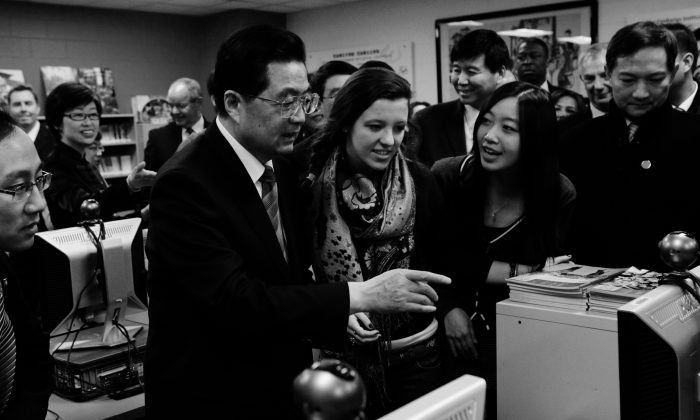 Then-Chinese Communist Party leader Hu Jintao visits a Confucius Institute that is housed at Walter Payton College Preparatory High School in Chicago, on, Jan. 21, 2011. The University of Chicago, which runs its own Confucius Institute, has come under fire. (AP Photo/Chris Walker, Pool)
China

A Call in Chicago to Cancel a Confucius Institute

Over 100 faculty members at the University of Chicago have raised their concerns about the existence there of an educational initiative that has the backing of the Chinese Communist Party. It is called a Confucius Institute, and in a remark that Chinese leaders will likely never live down, such facilities are an “important part of China’s overseas propaganda setup.”

That remark was made by the regime’s former propaganda czar Li Changchun and reported in 2009. Though the administration of the University of Chicago, and faculty members that support the Confucius Institute, appear to have gone to some lengths to defang the local Institute there of its ability to exercise political or ideological control, many faculty members are still extremely wary.

The petition lodged last week expresses a range of concerns.

“The University of Chicago is … participating in a worldwide, politico-pedagogical project that is contrary in many respects to its own academic values,” the petition says. “Indeed by lending its good name to the Confucius Institute project, the University, nolens volens,” that is, whether it likes it or not, “is helping to promote an enterprise that compromises the academic integrity of many universities around the world.”

One concern is “the dubious practice of allowing an external institution to staff academic courses within the University,” in this case exacerbated, they say, by the fact that the Confucius Institute’s supervisory body, called Hanban, is run by Chinese Communist Party political commissars.

Hanban, which makes the rules that Confucius Institutes around the world are supposed to follow, also includes staffing demands that violate workplace discrimination laws of Western countries, as well as such basic values as freedom of belief and expression.

Supporters of the Confucius Institute, and the university, however, did not respond to the essence of the concerns against the Confucius Institute, whatever its function, on campus. These are primarily that the institutes are a vehicle of influence for the Chinese state, which is controlled by a secretive Communist Party that seeks to establish its legitimacy around the world through outwardly benign initiatives, while at the same time quietly censoring individuals and views it finds inconvenient. Critics propose that simply by being in a university and dispensing funding there, a Confucius Institute can cause self-censorship.

Professor Hansen, in an email, said that the Confucius Institute at the University of Chicago primarily sponsors research, and that all its teaching and research activities are supervised and controlled by university faculty.

In Canada, the most prominent conflict of that kind came about at McMaster University in Ontario. The university was hit with a complaint at the Human Rights Tribunal of Ontario after it was found that Sonia Zhao, a teacher with the Confucius Institute, was forced to hide her belief in Falun Gong, a spiritual practice that is persecuted in China. Zhao said she was instructed in how to avoid politically sensitive topics during her training in Beijing. The round of bad publicity for McMaster ended with the decision not to renew a five-year contract, which ended last year on July 31.

The University of Chicago, on the other hand, appears set to continue its contract with the Confucius Institute there. The contract with the Confucius Institute will automatically be renewed in September unless one party moves to cancel it, with a 90-day notice. A meeting will be held on May 16, but there will be no vote on the matter. University administrators are not commenting.