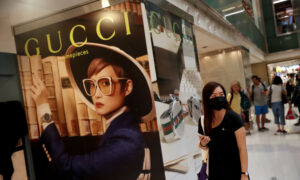 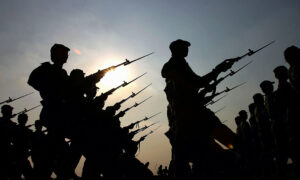 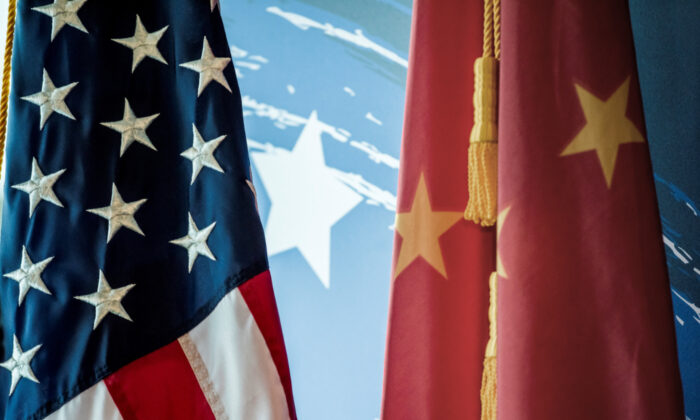 The Chinese and U.S. national flags on display during a promotional event in Beijing on Jun. 30, 2017. (Fred Dufour/AFP via Getty Images)
US News

WASHINGTON—Although China is undeniably and universally acknowledged by U.S. policymakers as America’s biggest strategic threat, the United States cannot say it wants to “contain” that threat.

That was one of the messages from Patrick Cronin, who holds the Asia-Pacific Security chair at the Hudson Institute in Washington, at the Westminster Institute on Jan. 18.

Cronin explained the rationale for this seeming paradox.

Suggesting that America wants to “contain” China is a term used by America’s enemies, such as Russia.

Therefore, the argument goes, the United States doesn’t want to play into the language of our adversaries.

Thus, despite defining a litany of Chinese aggressive abuses against the United States, its allies, and Chinese neighbors in the South Chinese Sea, rhetoric wins the day in defining what the U.S. strategy should be to counter the Chinese threat.

Cronin said the threat is a “whole of society” effort on China’s part to achieve dominance over the United States.

The military threat focuses on the South China Sea, Cronin explained, “because that’s where China has the most running room.”

The difference with the East China Sea is that there, “Japan stands in their way.”

Cronin suggested a nuanced approach by the Chinese. They want “to change the status quo without triggering a major response.”

That’s no different from the other revisionist states on the National Defense Strategy list, which, in addition, to China, are Iran, North Korea, and Russia.

But all want several of the same outcomes. Each wishes to eclipse U.S. power.

China’s total competition strategy includes several dimensions, as Cronin and other analysts in Washington’s policy world identify, although not all agree which areas are the most important to China in the long run.

Listing the military as fourth in importance is intentional.  “It’s not how they want to win,” Cronin said.

But China’s military posture still remains a major dimension of its outward-facing posture.

That’s because the United States isn’t China’s only roadblock to its ambitions.

“Every neighbor wants independence from China. None want to be China’s stooge. They all want autonomy,” Cronin said.

Apart from the general threats that China poses, which now form a common currency of thought among policymakers and influencers in the United States and beyond, Cronin also outlined a number of specific military tools that China uses to create an advantage.

First, in its efforts to “push us out of Southeast Asia altogether,” China uses anti-access/area denial (A2/AD) technology.

A2/AD is “a series of interrelated missile, sensor, guidance, and other technologies designed to deny freedom of movement” to the United States or any potential adversary from “intervening in a conflict off of China’s coast or from attacking the Chinese mainland,” according to international security scholars Stephen Biddle and Ivan Oelrich.

Second, it also has the DF-26, which is meant to strike hard targets such as Guam, Cronin says. The DF-26 (Dong Feng-26) is a Chinese intermediate-range ballistic missile, according to the Center for Strategic and International Studies (CSIS) Missile Defense Project.

“The missile can be armed with a conventional or nuclear warhead, and an anti-ship variant may also be in development,” CSIS adds.

Combined with the armed fishing boats that make up China’s maritime militia, and the relative might of the People’s Liberation Army Navy (PLAN), China’s coast guard makes up the middle layer of what is known as “cabbage strategy.”  Like the overlapping leaves of the cabbage plant, so common in Chinese households, the naval tactic encloses islands within successive layers of concentric circles, eventually compromising and essentially capturing them completely.

The Reed Bank incident in the Philippines in June 2019 is an example of the Chinese use of the maneuver.

A Chinese boat rammed a Philippine fishing vessel anchored at Reed Bank in the South China Sea. Left in the water by the Chinese, the 22 crew members were ultimately rescued by a Vietnamese vessel.

It was later proven that the Philippine boat was within the Exclusive Economic Zone of the Philippines, according to the official report of the incident.

Finally, of even greater concern are the new domains of cyber and space, Cronin said. To that end, at the end of 2015, China created a Strategic Support Force (SSF) as part of its overall military reforms.

RAND, a nonprofit global policy think tank, describes the main function of the SSF’s space component as “the launch and operation of satellites to provide the PLA with command and control, communications, computers, intelligence, surveillance, and reconnaissance capabilities.

“They are tools of strategic deterrence, critical to enabling the PLA to fight informatized local wars and counter U.S. military intervention in the region and essential for supporting operations aimed at protecting China’s emerging interests in more-distant parts of the world,” RAND states.

These systems are designed to employ cutting-edge technologies of artificial intelligence and secure space-based quantum communications, in which China is already a leader, and they plan to do it by 2025.