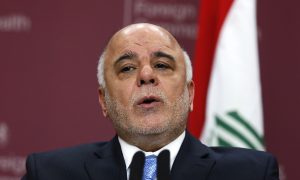 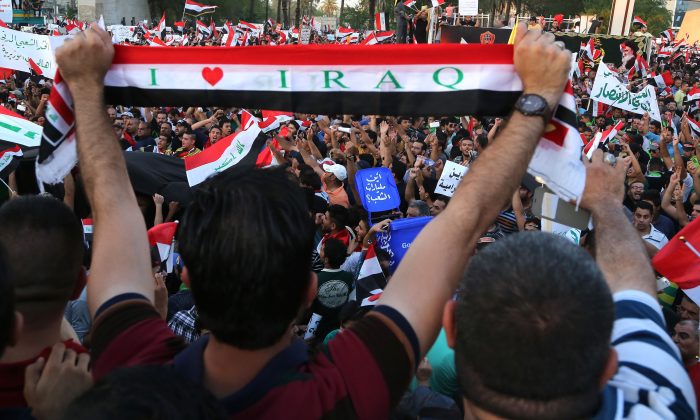 Demonstrators chant in support of Iraqi Prime Minister Haider al-Abadi as they wave national flags during a demonstration in Tahrir Square in Baghdad, Iraq, on Aug. 14, 2015. (Karim Kadim/AP)
Opinion

Moving decisively to cut the fat, al-Abadi slashed the Iraqi Cabinet by one-third. He abolished the positions of 11 ministers, 3 deputy presidencies, 3 deputy prime ministers and a total of 4 ministries altogether—although this, worryingly, includes the portfolios for human rights and women’s affairs.

An inquiry by an Iraqi parliamentary committee also found that former prime minister—and now a former vice president due to al-Abadi’s reforms—Nouri al-Maliki and other senior officials were responsible for the loss of Mosul to ISIS forces in June 2014. Al-Abadi has called for the court martial of the military officers who presided over the losses of Mosul and then Ramadi in 2015.

If genuine, is serious reform even possible given inevitable opposition from those with a vested interest in the status quo?

But why are these protests occurring and why now? What is al-Abadi trying to achieve by such reforms? Are these measures genuine or merely designed to placate the masses? If genuine, is serious reform even possible given inevitable opposition from those with a vested interest in the status quo?

It is hard to imagine that these measures are especially popular with many MPs. They are used to the perks and privileges of a corrupt, patronage-based political system. The near-unanimous adoption of the reform package by parliament is more likely to be indicative of politicians feeling the pinch of popular discontent rather than some belated mass epiphany regarding transparent government.

The stakes are high. The Iraqi state’s inability to provide security or basic services erodes its legitimacy, leading frustrated citizens to look elsewhere. Making inroads on the problem can help restore confidence in the government.

The Last Straw for Iraqi Citizens?

The situation in Iraq is oppressive—not only politically but physically. Given the hysteria surrounding ISIS in the West, the most obvious place to point the finger might be the government’s inability to turn the tide of conflict. But the answer is far more mundane.

A sizzling heat-wave has swept the region this summer. The ensuing hardship has been compounded by the scarcity of basic necessities, intermittent electricity and a lack of access to clean water—or water at all.

Iraqis are fed up with the government’s inability to provide basic services while the political elite lead the high life. Also, Orientalist conditioning has prevented many in the West from recognizing the importance of the everyday challenges faced by the Iraqi people.

Many Iraqis have identified government corruption as the principal culprit for poor public services. Iraq is ranked 170 out of 175 countries in Transparency International’s corruption perception index.

Corruption seeps into the daily lives of Iraqis through bribery at all levels of government—for instance, job trafficking (where positions in government or the security forces are purchased for a fee), preferential awarding of government contracts and the theft and redirection of public funds earmarked for public projects and services, to name a few.

Perhaps the most egregious example of corruption in the politico-military elite surrounds the fall of Mosul.

Perhaps the most egregious example of corruption in the politico–military elite surrounds the fall of Mosul. Many have wondered how fewer than 1,000 lightly armed ISIS fighters in pickups caused 30,000 heavily armed Iraqi soldiers to run for the hills. The simple answer is that they didn’t.

Many of these soldiers didn’t exist except on paper. Wages were paid to “ghost soldiers” and the commanders—largely chosen for their abilities to provide bucket loads of cash to the officials in charge of appointments—pocketed the excess. The entire process was a scam facilitated by a lack of U.S. oversight of the final destination of U.S. funding.

Nobody in these positions expected to do any fighting—especially not against highly motivated, eschatologically inclined jihadi with a penchant for mass executions.

Something New Under the Sun?

Can a newly energized anti-corruption drive gain traction in Iraq? There are reasons to be both cautiously hopeful and—like many Iraqis—skeptical.

For a start, it is extremely positive that the government allowed the protests to take place. It has not responded with repression, as the al-Maliki government did in 2013. Instead, the al-Abadi government has demonstrated a willingness to take swift and decisive action.

Such displays of assertiveness are notably uncommon in a political system characterized by indecision and prolonged disagreement. Clearly stated public support from the clerical establishment, notably Grand Ayatollah Ali al-Sistani—regarded by many as the most influential figure in the country—provides further moral and political authority. This backing is essential if the reforms are to build momentum and maintain broad political support.

Chipping away at the oft-criticized sectarian quota system for political appointments is perhaps the most promising element. It may signal recognition by the government that the status quo is unsustainable and that quotas are creating more problems than they solve.

Conversely, there is nothing really new in the reform package so far. All of the touted initiatives have been aired in the past and amounted to little. There is no implementation plan, which is where earlier initiatives have fallen down.

The sackings are symbolically important but can also be interpreted as political housecleaning and a short-term fix to keep the crowds happy. This may especially be the case regarding the possible court martial of al-Maliki in light of his prominent role in fomenting sectarian divisions between Arab Shiite, Arab Sunnis, and the Kurds.

A cynic might hold the view that al-Abadi acted not in the interests of Iraqis but because al-Sistani’s support for the protests forced his hand.

Most importantly, the challenge of reforming the notoriously corrupt judiciary has been delegated to—you guessed it—the judiciary.

While the reform initiative has broad support at this early stage, the political consensus may fracture over time as politicians find their interests directly threatened by steps in the reform process. Most importantly, the challenge of reforming the notoriously corrupt judiciary has been delegated to—you guessed it—the judiciary.

Even if al-Abadi’s stated goals are both sincere and feasible, whether Iraqis will believe this given the past indiscretions of the political classes is another question. The protesters may soon be back on the streets if words and gestures are not backed up by effective action.

Tristan Dunning is an adjunct research fellow at the School of Historical and Philosophical Inquiry at The University of Queensland, Australia. Damian Doyle is a doctoral candidate at the Centre for Arab and Islamic Studies at the Australian National University. This article was originally published on The Conversation.