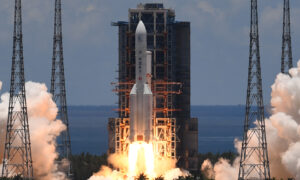 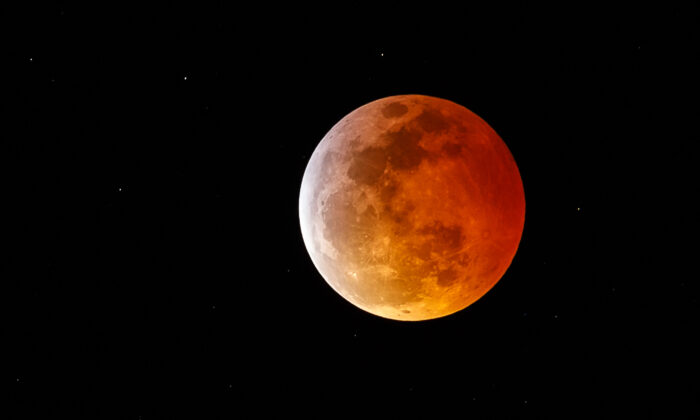 A blood moon eclipse is expected to appear on May 26. This phenomenon is a lunar eclipse that coincides with the moon’s closest approach to Earth—making it a supermoon eclipse that will turn the moon reddish. It will be most visible from the West Coast.

According to NASA, the red color results from sunlight filtering through Earth’s atmosphere, creating a ring of light created by all the sunrises and sunsets happening around our planet at that time.

What’s even more rare is that the upcoming lunar eclipse coincides with the largest super full moon of the year. The last time a super moon and a total lunar eclipse appeared at the same time was six years ago in September of 2015.

The ancient Chinese said that “Heaven and man are one.” When there is a celestial event, people, especially rulers, are called on to reflect on their deeds (good and bad) and to make a sacrificial offering to the sky.

Per Chinese belief, nature is related to humankind. If people on Earth behave well, nature will be merciful. When people behave badly, disasters will come from the sky.

On the evening of May 14, a tornado wreaked havoc in China’s Jiangsu and Hubei provinces, killing at least 12 and wounding more than 430 people. According to the Wuhan Meteorological Department, the local maximum wind speed was as high as 161 mph, causing extensive damage.

Typhoons along the southern coast of China were previously classified into categories 1 to 12. The largest category 12 typhoon has a wind speed of approximately 74 mph. The wind speed of the tornado that hit Wuhan that day was more than double the highest classification level for typhoons. The gale caused damage to two construction cranes, one of which collapsed on a construction site.

Trees were uprooted, structures were partially destroyed, telephone poles were knocked down, and more than 26,000 households lost power. According to Hubei authorities, many homes and properties were destroyed.

Regions near Shanghai also experienced a tornado on the same night, which damaged a lot of electrical equipment and took down telephone poles.

A tornado is a small-scale air vortex generated under severe weather conditions. The central wind can reach 223 to 447 mph. After a tornado is formed, it can last for ten minutes to a few hours. The range of the area at risk when a tornado arrives is small, but the destructive power of the tornado within that range is massive.

On the evening of May 15, the highest wind speed recorded in Zhaiji township, Kaiyang county, Guizhou Province was 99 mph.

Parts of Wuhan were also hit with hail, a rare occurrence with tornadoes. On the same day, in the towns of Zhongzhou, Matang, Xinkai, and Yunkou, Yueyang County, Hunan Province, a tornado with winds of EF1 level (classified as a weak tornado) occurred, damaging houses and agricultural greenhouses, and knocking down many trees.

One local was quoted by The Straits Times as saying, “I’ve grown up in Wuhan and I’ve never seen anything like it. … There’s been so much extreme weather recently.”

Historical Records of the Blood Moon

In Chinese and Western historical records, the appearance of the blood moon was often accompanied by wars, killings, and other disasters.

In Chinese literature, many wars are related to the scarlet moon. The most famous one took place during the period of the Southern and Northern Dynasties. When Emperor Qi Ming reigned the Southern Dynasties, the blood-colored moon rose. A few days later, a soldier named Sima Wang rebelled against the ruler.

In the 17th year of Chongzhen in the Ming Dynasty, the day after the blood moon appeared, Li Zicheng, a peasant rebel leader, broke through the city of Beijing and overthrew one of China’s greatest dynasties. The Emperor Chongzhen was hanged from a tree and the Ming Dynasty collapsed.

Many Westerners are also afraid of the blood moon. Revelation 6:12 from the Bible makes reference to it: “I looked when He broke the sixth seal, and there was a great earthquake; and the sun became black as sackcloth made of hair, and the whole moon became like blood.”

Some Western folk stories associate werewolves and vampires to the full moon and blood moon.

Many modern people don’t believe that the blood moon is connected to major events and merely regard the phenomenon as a superstitious coincidence. But the traditional Chinese believe that “heaven and man are one” and that changes in celestial phenomena correspond to major events in the human world.