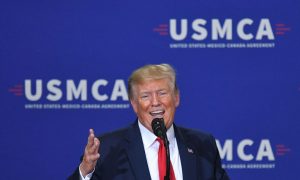 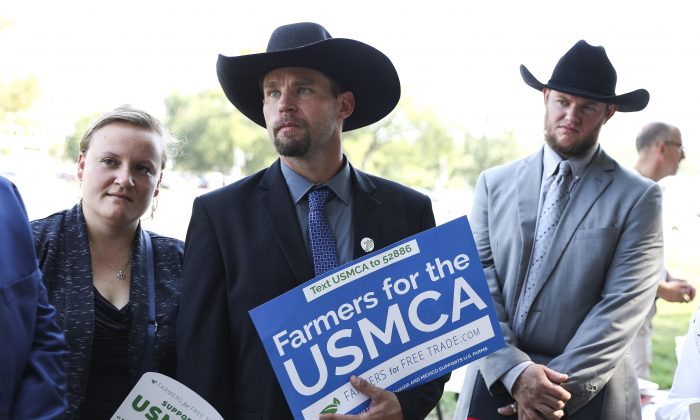 Members of Congress and farmers from across the country rally for the United States-Mexico-Canada Agreement (USMCA) on the National Mall in Washington on Sept. 12, 2019. (Samira Bouaou/The Epoch Times)
Politics

A Bipartisan House Group Rallies With Farmers for USMCA

WASHINGTON—House Speaker Nancy Pelosi (D-Calif.) is facing growing bipartisan pressure to bring the United States–Mexico–Canada Agreement (USMCA) to the House floor before the end of this year.

A bipartisan group of lawmakers and farmers from across the country rallied Sept. 12 in the nation’s capital for the new free-trade agreement with Mexico and Canada, which will replace the 26-year-old North American Free Trade Agreement (NAFTA).

The Trump administration on Sept. 11 sent the latest proposal to Pelosi to address some of the concerns raised by Democrats about the USMCA. Democrats, who control the House, have called for stronger labor and environmental provisions.

Speaking at the farmers’ rally, Rep. Kevin Brady of Texas, top Republican on the House Ways and Means Committee, said that the bipartisan lawmakers and various industry groups “built a lot of momentum for this trade agreement over August.”

“For Democrats, this is a dream agreement that is so much better than the existing NAFTA,” he said.

Congressman Jim Costa (D-Calif.), who was among the bipartisan group joining the rally, said the House Speaker was supportive of the agreement.

“I think if we’re able to work out the issues on the labor agreement with Mexico to ensure that they’re enforceable as well as the environmental and biomedical challenges, yes, I think she wants to have an agreement,” Costa told The Epoch Times.

“[Pelosi] knows how important it is to America’s economy—for consumers, for working people, as well as for farmers, ranchers, and dairyman,” he said. “She’s from California, the largest agricultural state in the nation.”

According to Costa, 44 percent of California’s agriculture is dependent on foreign trade.

House Agriculture Committee chairman Rep. Collin Peterson (D-Minn.) and Rep. Henry Cuellar (D-Texas) were among the other Democrats who threw support behind the USMCA.

Speaking at the rally, Peterson said he “immediately came out in favor of the USMCA” after seeing the improvements to the old trade agreement in dairy and some other areas outside of agriculture.

“I think we’re on track, at least at this point, to get this thing up for a vote in the next month or two,” he said.

“We still have skeptics. We have people that are not in favor of this, and we’ve got to work through the system. And that’s what we’re doing right now. But as of right now, I’m optimistic.”

Democrats have been demanding stronger enforcement mechanisms on labor and environmental standards in the new agreement. They’ve raised questions about Mexico’s implementation of labor standards. In addition, they’ve raised concerns about a pharmaceutical provision, which they argue would raise the prices of vital drugs.

Rep. Mike Conaway (R-Texas), ranking member of the House Committee on Agriculture, voiced hope that the congressional approval of the deal may happen this year.

“I don’t know if there’s much left,” Conaway told The Epoch Times when asked about the sticking points for Democrats.

He said Ambassador Lighthizer sent a letter to Pelosi last week “answering what we hope are the final questions that the speaker had. And so we should be right at the last moment of getting this done.”

“There is no reason it can’t get done in September, but I’m pretty confident it’ll get done this year,” he said.

Angela Guentzel, a corn and soybean farmer from south-central Minnesota, said Canada and Mexico are significant markets for her farm business. She was among the dozens of farmers from across the country who joined the rally in Washington.

“Agriculture is in an interesting time right now with our markets and our weather patterns recently. And we need support. We’re looking for trade, not [government] aid,” she said.

“The sooner that we can push the USMCA, the better. We’re getting to the harvest time. And right after harvest time is when we do all our marketing and all our work with our bankers and lenders. So I cannot stress the importance of the timing,” she said, urging Congress to vote for the agreement.