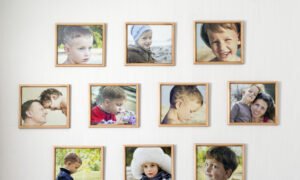 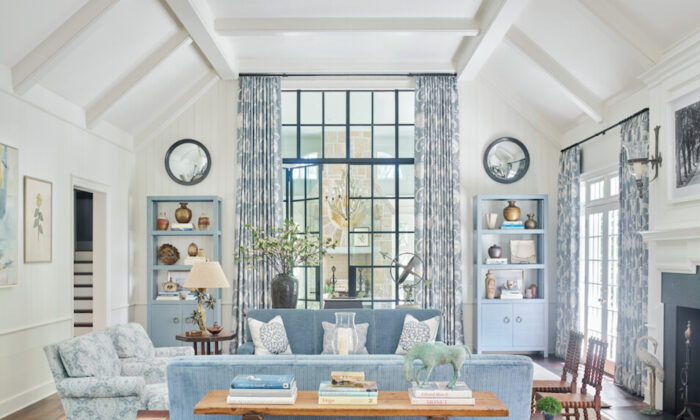 For the family room of a house in the Buckhead district of Atlanta, interior designer Phoebe Howard used étagères (open shelves) to balance the scale of the large-sized doors. (Emily Followill)
Architecture & Interiors

Celebrated interior designer Phoebe Howard often visited her grandparents’ farm in Alabama as a child. It was there that she first nurtured an appreciation for a well-tended home.

“Visits with people were a big deal. Everybody spent time together, and it just sort of made a lasting impression on me—that your house is really important and should be given a lot of consideration,” she said in a recent interview.

Howard channeled that attentiveness into a career, first making her name operating Mrs. Howard, a home furnishings establishment that has since expanded into multiple locations across the southern United States, together with her husband.

Around 2005, she branched out into interior design, developing a reputation for her fresh takes on traditional styles—elegant, timeless, yet updated for modern living.

In Howard’s latest and fourth book, “The Principles of Pretty Rooms,” she outlines how to create spaces that are warm, inviting, and comfortable.

That kind of balance is a recurring theme in Howard’s designs.

It not only means pairing objects or furniture in a room, but also contrasting, for example, a wood-paneled great room with plush upholstered furniture. Similarly, a space with natural textures in its furnishings—a driftwood tabletop, rough-hewn beams, and wicker chairs—can be offset by smooth, sleek walls and ceiling surfaces.

She noted that such balance comes from “extreme control.” She advises that when decorating rooms, one should first draw up floor plans and determine appropriately sized furniture.

“Don’t buy something unless you know that it fits, and that it blends with all the other elements in the room,” she said.

After identifying the right pieces, then begin selecting fabrics.

While it takes experience and a trained eye to achieve Howard’s style, the designer hopes that her book can provide plenty of examples to serve as inspiration for the average home dweller.

As for “how to arrange rooms,” and “how to employ the principles,” Howard said, “mix old and new, use a lot of solids, reduce color contrast, have symmetry, completely accessorize it, and be organized—those are all things that anybody can do.”

She is an advocate for incorporating antiques into rooms, which “bring in a patina, a history, and another layer that’s more interesting than just all-new furniture.”

Howard especially looks for antique pieces with clean silhouettes, which tend to fit in well with modern living spaces.

For example, Howard’s book shows her apartment in the Buckhead neighborhood of Atlanta. In her living room, she places chairs, pillows, and a rug—a mix of several ivory shades and textures. Antique wooden tables and cabinets, all dating from different eras, complement the soft colors with their dark, warm hues and simple lines.

Ultimately, Howard encourages people to be true to themselves—including going for bold colors, if desired.

“The Principles of Pretty Rooms” demonstrates how a brightly colored palette of coral pink and lime green can create an atmosphere that is cheerful and vibrant, yet still sophisticated.

Her tip is to incorporate subtle variety in the hues, tempering the strong colors.

As people spend more time indoors due to the ongoing pandemic, creating a “pretty” oasis provides a sweet escape from the stresses of the outside world. Howard’s book is filled with guidance on how to achieve just that.