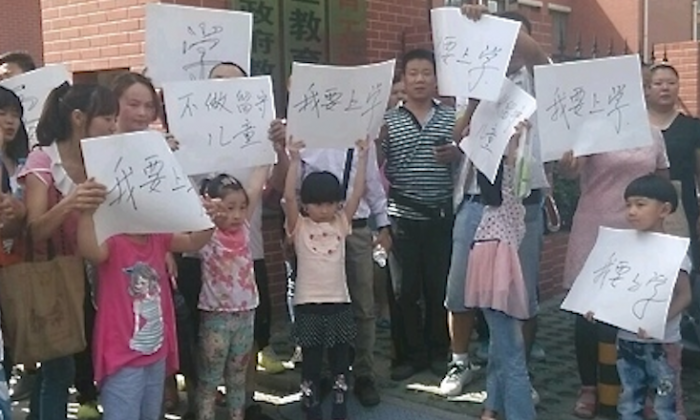 Migrant worker parents and children protest in front of Beijing's suburban Chaoyang district education department on May 25, 2014. Their children have been barred from attending school in Beijing because they do not have the needed residency papers. (Photograph supplied)
China

“I want to go to school!” shouted a mass of children barred from attending school, along with their parents, protesting in front of the education department in Beijing’s Chaoyang District in late May. It was yet another demonstration that China’s household registration system is malfunctioning dangerously.

Rejected by Beijing elementary schools because they lacked a Beijing household registration, called “hukou” in China, the children join tens of thousands of other non-resident migrant workers who live and work in Beijing. Migrant workers are Chinese citizens who were born in a city other than the one in which they work—the term typically refers to the hundreds of millions of factory and menial laborers who come from the countryside into the cities.

The Communist regime’s policies to restrict non-resident workers through the hukou system—a kind of internal visa that has been compared to apartheid, in how it makes a sharp separation between city and country dwellers—has spawned a number of growing problems, in this case, lack of educational facilities for children who need it.

The system forces tens of millions of migrant workers to chose between leaving their children behind to attend school in the hometown where they are registered, or taking them along to the cities where access to schools is severely restricted or absent altogether.

At the education department in Chaoyang, Beijing, some outraged parents hurled rocks and wine bottles at the doors of the building, while children held up hand-lettered signs: “Our children’s China Dream is to go to school!” and “Our children are innocent!” Other parents moved through the crowd wearing T-shirts with similar slogans on the front and back.

The reference to a “China Dream” mimics official propaganda, which promises that Chinese people will be able to fulfill their aspirations to middle class lifestyles under the rule of the Communist Party.

In 2013, state run elementary schools in Beijing began to require parents without a Beijing hukou to provide five documents in order to enroll their children, an onerous and difficult requirement for hard-knock factory workers, and one that locals are not subject to.

“These requirements are definitely not right, since Beijing now has more than 10 million non-Beijing residents,” said Xiong Wei, director of the Beijing-based Institute for Citizen Participation in Legislation, in an interview with Sound of Hope radio.

“Their children should be treated the same as Beijing residents. Their parents are working in Beijing or are migrant laborers in Beijing. Forcing children to leave their parents to go back to their hometown is definitely not right.”

Beijing civil rights lawyer Cheng Hai said that, according to the Chinese constitution and the Compulsory Education Law, a citizen’s education ought not be restricted by his household registration.

The demand for copious documentation before children can enroll in school is illegal, he argued. “The temporary residence permit is illegal. When citizens come here, whether temporary or long-term, their children’s education should not be restricted by their residential registration,” he told Radio Free Asia.

Parents are seeking to challenge local governments through the court system, testing the legal basis of the rules that effectively bar their kids from schools.

Annual promises to fix the system have come to little. In 2012, Wen Jiabao, the premier of China at the time, announced the intention to remodel the hukou system and its correct some of its problems.  Little was done, in fact, though.

Authorities have also made it difficult for Chinese parents to create their own schools in Beijing. In 2011, they shut down 23 schools established by migrants in Beijing, infuriating parents and observers. In other cases, the authorities have turned off the utilities in an attempt to force the schools to shut.

Tian Kun, a well-known lawyer who has worked with migrant schools for several years, told the Economist that closing schools and forcing children out will only make relations between the people and the state worse in Beijing. He said that the parents of the children deprived of an education are “filled with hate.”