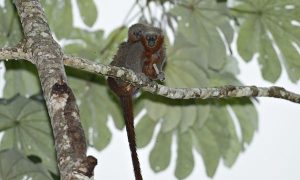 A Baboon in England Was Spotted Flossing Her Teeth (Video)

Flossing is an important—but often overlooked—aspect of dental health. One baboon at Paignton Zoo in England, spotted flossing with a broom bristle, is an inspiration to us all.

A collection of broom heads had been given to the zoo’s baboons. Many were seen sweeping with the discarded cleaning supplies, but a volunteer noticed a singular sight; one female pored over her broom head, tore out a bristle and methodically flossed her teeth. She even had an audience among her peers.

The zoo’s director of conservation and education noted that while it’s not uncommon for animals to be taught to behave in certain ways, spontaneous use of tools is a much more scientifically important phenomenon.