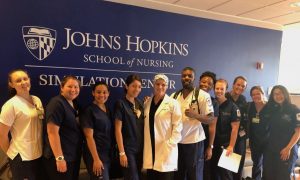 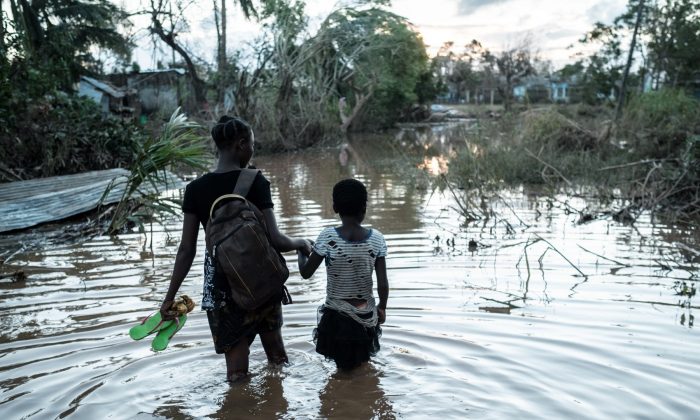 Two children walk in flooded waters from their house destroyed by the cyclone Idai, to go to seep in a shelter in Buzi, Mozambique, on March 22, 2019. (Yasuyoshi Chiba / AFP)
Africa

A selfless act by a 71-year-old woman has caught the attention of Zimbabwe’s richest man, who called the grandmother’s several-mile trek while carrying clothing and household items for cyclone survivors “one of the most remarkable acts of compassion I have ever seen.”

Plaxedes Dilon is being praised in Zimbabwe and beyond after she lugged the aid on foot to the Highlands Presbyterian Church in Harare, where volunteers have been coordinating relief efforts for thousands displaced since Cyclone Idai struck southern Africa in mid-March.

The church posted a photo of Dilon with a sack balanced on her head and noted she could not afford a ride from her neighborhood, about six miles away.

Now, Zimbabwean billionaire Strive Masiyiwa has vowed to build Dilon a home wherever she wants in the country. The telecom executive also promised her $1,000 per month for life, he announced in a Facebook post.

Reflection: A disastrous cyclone hit Madagascar, Mozambique, Zimbabwe and Malawi__What might you be able to do to…

“What she did is one of the most remarkable acts of compassion I have ever seen!” Masiyiwa wrote.

“When this is over, I’m going to find her, and invite her to come and see me, if possible. Then, I will spend time in prayer with her! Then I will build her a house anywhere she wants in Zimbabwe! It will have solar power and running water!” he continued.

Dilon gave away some of the clothes she sells for a living after she heard the news of the disaster on the radio, she said, according to local news reports.

“I immediately packed the clothes and jackets that I earlier purchased for resell and carried my bag … the following morning,” Dilon told ZimLive.

Masiyiwa, whose company is leading local and international relief efforts for thousands in eastern and southern Zimbabwe, said her act of generosity moved him.

There has been an outpouring of support and aid from countries and relief organizations across the world for Idai victims in Zimbabwe, Malawi, and Mozambique, where more than 750 people are estimated to have being killed by the cyclone.

The Category 2 storm made landfall after midnight on March 15 in Beira, a port city in Mozambique, and submerged villages as it tore inland toward Zimbabwe and Malawi.

In Beira, where 90% of the city was destroyed, people clung to rooftops as they waited to be rescued, aid agencies reported. A witness described how more than 300 bodies washed up on a flooded stretch of road outside the city.

The massive scale of the devastation wrought by #CycloneIdai is becoming clearer by the day. The lives of millions of children & families are on the line, and we urgently need to mount a rapid and effective humanitarian response across all three countries. https://t.co/77u9gsXd1k