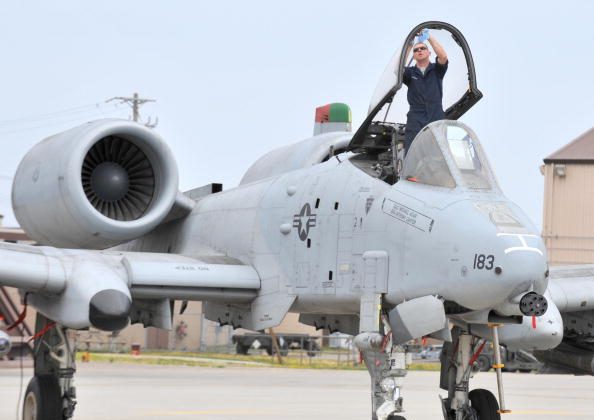 A US Air Force airman cleans the canopy of an A-10 Thunderbolt aircraft April 14, 2009. (KIM JAE-HWAN/AFP/Getty Images)
US

A-10 Warthog Used by US to Fight ISIS

The A-10 Thunderbolt II, known as the Warthog, will be deployed by the US to combat ISIS militants in Syria and Iraq.

According to a Wired magazine report on Friday, an unknown number of Warthogs–based at the 163rd Expeditionary Fighter Squadron based at Fort Wayne, Indiana–have been sent to bases around the Middle East to provide close air support to troops fighting ISIS, or the Islamic State.

The plane is described by Military.com as the “U.S. Air Force’s primary low-altitude close air support aircraft” and has “excellent maneuverability at low air speeds and altitude, and is a highly accurate and survivable weapons-delivery platform.” The plane has been in use since the 1970s.

Since it made its debut, it has been upgraded numerous times over the years. In 2005, the entire A-10 fleet got Precision Engagement upgrade and other boosts.

“It’s a game-changer,” Gen. John F. Campbell was quoted in the Wired article as saying. “It’s ugly. It’s loud, but when it comes in and you hear that pffffff [of the cannon], it just makes a difference.”

But the Air Force wants to cut the aging warplane to save approximately $4 billion over the remainder of the plane’s expected service life. A proposal was laid out to place about 36 of the planes under “backup flying status,” according to IB Times, and they would be flown to be kept in working order.

“Based on what the Air Force told us, the 36 aircraft going to backup flight status nets them about 100 maintenance people,” a legislative aide was quoted as saying. “They said they needed 800 in [fiscal year] 2015, so it is pretty thin gruel we’re offering them.”

Jeffery S. Underwood, who is a historian at the United States Air Force Museum at Wright-Patterson Air Force Base, said the plane was originally designed to basically “take apart a Soviet tank.”

But while the plane has its supporters, it is “getting older and more expensive to maintain, and that’s the problem,” Underwood concedes.