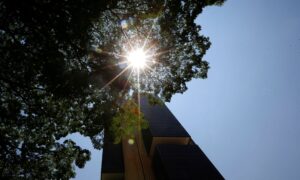 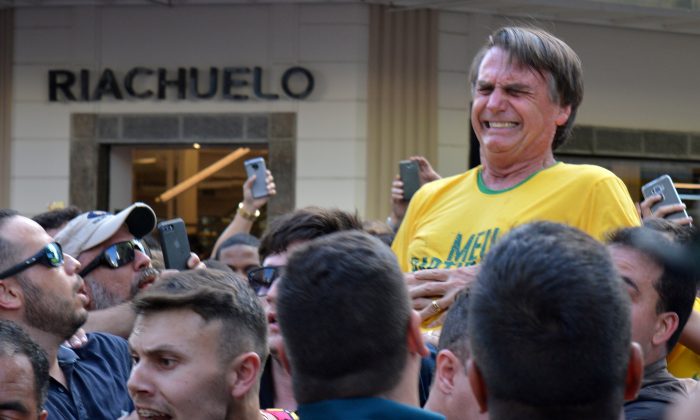 Exclusive: Who is Brazil’s Bolsonaro, Stabbed During Presidential Campaign?

The conservative candidate Bolsonaro, usually described in media as “far right,” is a former military officer and congressman and leader of the Social Liberal Party. He is currently in the hospital recovering from his wounds.

The alleged attacker, Adelio Bispo de Oliveira, is in police custody. He has reportedly said he was acting on divine orders.

According to José Alvaro Moisés, a professor of political science from the University of Sao Paulo, Bolsonaro has the support of conservatives, as well as those who have been impacted by the economic downturn in Brazil.

“[Supporters include] the ones who feel unsafe, who lost their jobs and income due to the economic crisis in the last few years caused by Workers Party policies,” Moisés told The Epoch Times.

Workers Party was part of a coalition of parties forming the government from 2003 to 2016, counting as members former President Luiz Inácio Lula da Silva, who was convicted of money laundering and corruption in 2017. Da Silva was barred from running in October’s presidential elections after a majority of judges in Brazil’s electoral court earlier this month voted against his candidacy due to his conviction.

Da Silva’s replacement as president and fellow Workers Party member, Dilma Rousseff, who took office in 2011, was herself impeached and removed from office in 2016 and replaced by her vice president, Michel Temer.

In an exclusive interview with The Epoch Times days before being attacked, Bolsonaro talked about his platform, perspectives on foreign affairs, and thoughts about Brazil’s prospective partners.

According to Bolsonaro, improving the country’s economic situation is his highest priority.

If elected president, Bolsonaro said he would reduce “the tax burden” to stimulate the economy, saying he was inspired by U.S. President Donald Trump’s policies.

Dubbed by some as “Brazil’s Trump,” Bolsonaro has high admiration for the U.S. president.

“When Trump took over as the president of the United States, he started to fulfill his promises, leaving the Trans-Pacific Partnership and the Paris Agreement on Climate Change, which is an attitude I also would like to take.”

What he admires most about the current U.S. administration, Bolsonaro said, is “union, patriotism, [and] Trump speaking about God and family—values that aren’t being followed in Brazil.”

When it comes to foreign relations, Bolsonaro said he intends to cultivate closer ties with “first-world countries.”

Brazil’s foreign policies have in the past two decades been more aligned with neighboring countries, particularly during da Silva’s presidency from 2003 to 2011, when most of the region’s policies were influenced by the “pink tide,” or “turn to the left.”

In those years, most South American countries were headed by left-wing politicians whose focus was on building strong regional blocs. The formation of the Southern Common Market (Mercosur) and the Union of South American Nations was a result of this trend.

Bolsonaro believes that Brazil should reconsider those partnerships and focus on others that he thinks would be more beneficial. His proposal is to reduce the influence of Mercosur, which he claims is “excessive.”

“They are trying to buy fertile lands, and if we open our market to that, we will give up on our food safety.”

If elected president, to implement the changes he seeks, Bolsonaro would need the support of the country’s congress, which could be a challenge for his small party that so far has no alliances with major parties.

Bolsonaro is also critical of the way media have been portraying him.

“Most of the press is against us; they are fake news. So fake news, here in Brazil, is the press itself,” Bolsonaro said.

“We will not impose regulations over media, but we don’t want the leftists to interfere in the news that circulates through WhatsApp, Facebook, and Instagram.”