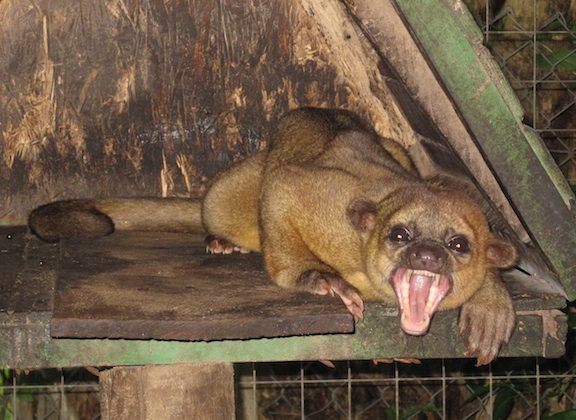 What are the odds of this?

A 99-year-old woman got the scare of her life after she woke up to discover an odd-looking wild animal native to Central and South America resting on her chest.

The unnamed Miami woman discovered the exotic mammal, called a kinkajou, curled up and sleeping on her. Veterinarians later confirmed that the animal was a kinkajou, and NBC Miami reported that it was someone’s pet.

“I can’t believe it. I thought she was lost forever,” said Raymond Fernandez, the owner. “I’m glad she’s okay.”

At around 2 a.m., the terrified woman called her son-in-law, who came over to her home and found the kinkajou in her attic. He lured it out with food and took it to a vet, Dr. Don J. Harris, who works for the South Dade Avian & Exotic Animal Medical Center.

“No undomesticated wild animal like this would curl up on a woman’s chest to go to sleep,” Dr. Harris said. “She was tired, cold, hungry, traumatized, and all she really wanted to do was curl up in a ball and hide,” Harris added to Local 10 TV.

The animal, named Banana, was on the run for more than a week.

“I saw it in the bushes, kind of looking at me, and I saw a tail and we’re like, ‘What is that?’ We called it over and it was kind of playful,” said local man Arthur Guisasola, who saw Banana last week. “That should be home and taken care of at all times because it can cause a shock to everyone.”

Fernandez said the animal figured out to open up his cage.

“I was tenting my house and I had to move her to my brother’s house in a temporary cage, and she figured out a way to open it up,” Fernandez told Local 10 TV. “She’s got really good hands.”

Kinkajous are a rainforest mammal part of the family Procyonidae and is related to olingos, coatis, raccoons, and the ringtail and cacomistle. They are not closely related to ferrets or monkeys. It’s not an endangered animal, but they’re rarely seen by people due to their nocturnal nature. They are, however, hunted for the pet trade and for their fur.

In Honduras, one needs a permit to export the animals, which can also live up to 40 years in captivity.

They weigh between 3 and 10 pounds and get to two feet in length.