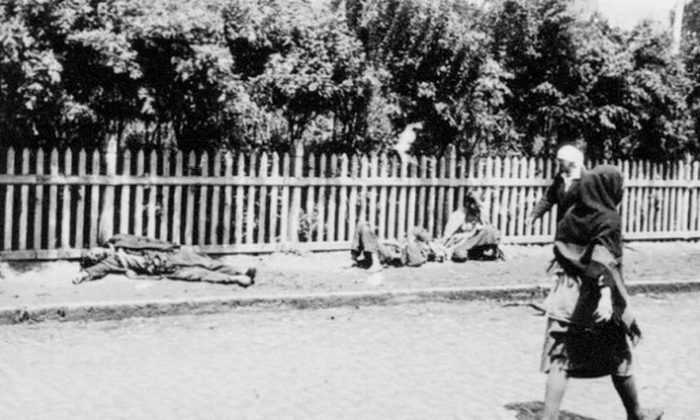 A 99-year-old man recounted his experience of one of the greatest crimes—one unbeknownst to many—committed in Ukraine right before World War II.

Millions of people were killed when Soviet dictator Joseph Stalin starved the populace, forcing a famine on Ukraine, according to some scholars. To them, it was known as Holodomor, or “death by hunger” in Ukrainian.

Although there is debate as to the role the Soviet leadership played during the famine, “Stalin’s targeting of Ukrainian farmers proved relentless and insurmountable for the country’s peasantry,” says Rutgers University.

Fedir Habelko, who survived the famine, shared with the Herald Sun in a recent interview his memories of the horror.

During Holodomor, which killed an estimated 2.5 to 7.5 million Ukrainians in the year between 1932 and 1933, communist officials tried to prevent people from eating in an attempt to force peasants onto collective farms. The man-made famine is classified as a genocide by Ukraine’s government and 24 other countries.

“I have a vivid recollection of one day going to the station with the school and near the station there was a woman with a child lying on her—both had died,” Habelko was quoted as saying.

“At school we had a little bowl of soup which was served to us—it had like three solitary peas swimming in it—and we were given a tiny little piece of bread to go with this.” He said his father could catch fish in a river on his farm, but many others near him weren’t as fortunate.

“We had relatives who died from starvation,” he said.

As documented during other communist-linked famines, there were accounts of cannibalism.

“Survival was a moral as well as a physical struggle,” according to Timothy Snyder’s “Bloodlands: Europe Between Hitler and Stalin.”

The Soviet Union denied Holodomor ever happened in the late 1980s—right before it collapsed. The Russian government still denies it was a genocide.