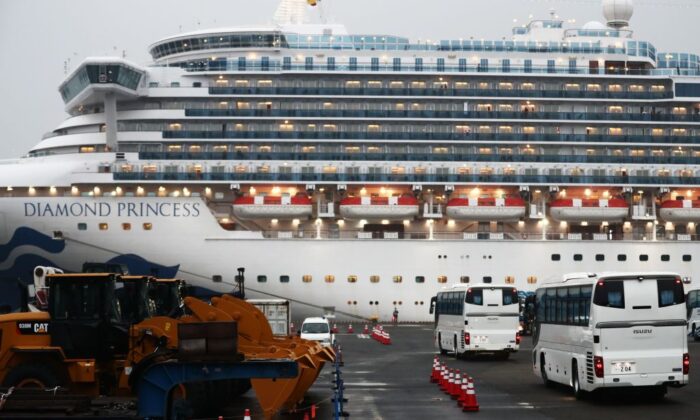 Two buses arrive next to the Diamond Princess cruise ship, with people quarantined onboard due to fears of the new coronavirus, at the Daikaku Pier Cruise Terminal in Yokohama port in Japan, on Feb. 16, 2020. (Behrouz Mehri/AFP via Getty Images)
CCP Virus

The announcement was made by Japan’s Ministry of Health, Labor, and Welfare, after testing 504 people on the ship, according to local outlet NHK. Among the 99, 85 are passengers and 14 are crew members.

The latest infection cases bring the total known cases of coronavirus on the ship to 454, after a total of 1,723 passengers and crew members have been tested.

The ship, which has been quarantined in Japan since Feb. 4, is currently docked in Yokohama. The quarantine is due to end on Feb. 19.

According to Japanese media, there were about 3,700 passengers and crew members when the ship docked in Japan, but now about 3,000 remain on the ship.

It is not known if the 99 people include new infection cases reported by the U.S. government on Monday.

The United States flew home 340 Americans who were aboard the cruise ship on Monday. There were about 400 U.S. citizens on the ship in total, according to the U.S. Centers for Disease Control and Prevention.

“During the evacuation process, after passengers had disembarked the ship and initiated transport to the airport, U.S. officials received notice that 14 passengers, who had been tested 2-3 days earlier, had tested positive for COVID-19,” the statement said.

The two planes have landed in the United States—one arriving at Travis Air Force Base in northern California just before 11:30 p.m. Sunday local time, and the other at Lackland Air Force Base in Texas about two-and-a-half hours later, according to AP.

The 14 infected people were isolated from the rest of the passengers on the flights, according to the joint statement.

Passengers without any symptoms of the virus will be placed under quarantine for 14 days.

It is not yet known where the 14 will be transported to for continued isolation and treatment.

On Sunday, Anthony Fauci, Director of the U.S. National Institute of Allergy and Infectious Diseases, told The Washington Post that 44 Americans on the ship had tested positive for the virus.