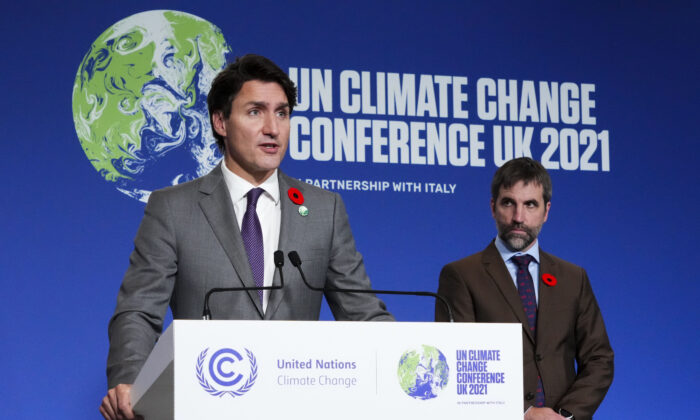 Canada’s pursuit of the United Nations’ sustainable development goals has made headlines in recent months, but the roots of its participation go back 50 years. Beyond the better-known aspects, such as reducing carbon emissions, are a wide range of social and economic goals lumped together with environmental ones.

In 2010, the U.N. Convention on Biological Diversity, first signed by Canada in 1992, committed to setting aside 17 percent of the world’s land within protected areas by 2020.

In 2013, the U.N. General Assembly established the Open Working Group on Sustainable Development Goals, which include Canada as a member, to do further work on Agenda 21.

In September 2015, one month before the election of the Trudeau Liberals, Canada and all of the other 192 U.N. member states adopted the 2030 Agenda for Sustainable Development, which has 17 sustainable development goals (SDGs) at its core. The title of the federal webpage “Explore our 17 goals” suggests that the government has fully made the U.N.’s goals its own.

In December 2015, Canada sent a delegation of 383 people to the U.N. climate conference in Paris—more than Australia, the UK, and the United States combined. It remains a federal goal for Canada’s delegations to the U.N. High-Level Political Forum on Sustainable Development to include representatives from all levels of government, indigenous partners, civil society, academia, and youth.

In 2020, the Federal Sustainable Development Act was amended to broaden the focus by adding social and economic factors and to promote greater federal collaboration. It increased the number of federal organizations that must contribute to advancing the 17 SDGs by developing and reporting on their own departmental sustainable development strategies. The current draft FSDS for 2022–2026 includes contributions from 99 federal organizations.

In 2021, Canada and 50 other countries agreed to set aside 30 percent of their land and oceans within protected areas by 2030, a goal that convention signatories are expected to adopt at the upcoming CBD conference in Montreal in December.

The Canada Child Benefit was introduced in 2016 as part of SDG 1, “No Poverty.” The CCB now pays eligible families up to $6,997 per child under 6 and $5,903 per child aged 6 to 17. In 2018, the feds published Canada’s first national poverty reduction strategy, saying that it “brings together new investments of $22 billion that the government has made since 2015.”

In 2018, through the SDGs Funding Program, the government committed up to $59.8 million over 13 years to support programs that aim to raise awareness and further the implementation of the 2030 Agenda. Beneficiaries included not-for-profit groups, municipalities, provinces and territories, and universities and colleges, among others.

The Canadian Gender Budgeting Act of 2018 mandated consideration of gender equality and diversity for all aspects of federal budgeting, fulfilling SDG 5, “Gender Equality.” A federal report on Climate Change and Gender in Canada highlighted activists and academics such as one specializing in “Feminist geography in the North.” In 2019, the Rainbow Refugee Assistance Partnership was launched to bring in LGBTQ2 refugees.

Goal 10, “Reduced Inequalities,” was helped by the federally funded Black Entrepreneurship Program in 2021. That year, the Liberals also pledged $18 billion for indigenous communities and $40 billion to compensate First Nations children harmed by the underfunding of child and family services on reserves. A 2021 publication by Canada’s SDG Unit on the country’s 2030 Agenda National Strategy, titled “Moving Forward Together,” says embedding indigenous rights “must occur at a whole-of-society level.”

The Global Compact for Safe, Orderly, and Regular Migration, signed by Canada in 2018, fulfills Goal 10’s Target 10.7. It lumps political refugees and economic immigrants together under the category of “migrants,” giving them the same rights as citizens in some respects. A study by MigrationPolicy.org estimated that nearly 50,000 asylum seekers entered Canada irregularly via land crossing from the United States, mostly via Roxham Road along the New York-Quebec border, over a two-year period beginning spring 2017.

Goal 9 aims to “build resilient infrastructure, promote inclusive and sustainable industrialization and foster innovation,” while Goal 11 aims to “make cities and human settlements inclusive, safe, resilient and sustainable.” To advance these goals, Canada adopted the New Urban Agenda at the U.N. 2016 Habitat III Summit. In 2019, the federal, provincial, and territorial governments formed the Emergency Management Strategy for Canada: Toward a Resilient 2030, to tackle disasters such as hurricanes, floods, and wildfires. In 2021, Canada joined the international Coalition for Disaster Resilient Infrastructure.

A subset of Goal 11 is “sustainable transport,” which includes expanding public transport. Last year, a permanent public transit fund was launched to that end. Another new fund was formed the same year, under Canada’s National Active Transportation Strategy, to build new and expanded networks of pathways, bike lanes, trails, and pedestrian bridges.

‘Every Part of Civil Society’

Canada’s 2021 “Moving Forward Together” strategy paper explained that the 17 SDGs at the heart of the 2030 Agenda have 169 targets measured by over 230 indicators. It says there’s “a place for every institution, every part of civil society, every level of government, every Indigenous community, and every individual” to contribute to achieving the SDGs.

Canada’s Sexual and Reproductive Health and Rights (SRHR) page estimates that for “each additional child born to a woman between the ages of 25 and 39, labour participation decreases by 10 to 15 percent.” In 2019, Canada committed $1.4 billion annually for 10 years, starting in 2023, “to promote the health and rights of women and girls” abroad. This includes making sure “women and girls around the world have access to the quality health services they need, including safe and legal abortion.” Half of the annual investment was designated for SRHR in partnership with organizations such as the UN Population Fund, the International Planned Parenthood Federation, and Family Planning 2030.

“Moving Forward Together” says “Canada’s Feminist Foreign Policy supports an enabling environment for the SDGs.” The SRHR page adds that a comprehensive approach to SRHR also “means looking beyond health services to address the gendered inequalities, discriminatory social norms and institutional structures that limit the promotion of SRHR.”

However, the feds also endeavour to change their own citizens’ values. In 2021, the Privy Council Office’s Impact and Innovation Unit launched a multi-year Program of Applied Research on Climate Action in Canada that would use “behavioural science insights and methods” to promote climate action. The effort promises to research “how Canadians think, feel and act in response to climate change and the risks it creates.”

“We will then develop and test, online and in the real world, specific behaviourally-informed solutions with the potential to reduce GHG emissions and promote climate adaptation at the individual and community level,” the program’s overview says.

In May 2020, Canada joined Jamaica and the U.N. secretary-general to lead the Initiative on Financing for the Development in the Era of COVID-19 and Beyond. In 2021, Canada made a $5.3 billion commitment over five years to help developing countries fight climate change, doubling its $2.65 billion 2015–2021 international climate finance commitment. At home, the Canadian Net-Zero Emissions Accountability Act of 2021 formalized Canada’s target of achieving net-zero greenhouse gas (GHG) emissions by 2050. The act says Canada must lower its emissions by 40–45 percent below 2005 levels by 2030 as its contribution under the Paris Agreement.

The draft FSDS 2022 to 2026 document, released by Environment Minister Steven Guilbeault in March, sets various targets for 2024, 2025, and 2026 to establish electric charging stations, hydrogen fuel facilities, natural gas stations, biomass supply chains, and stricter building codes. By 2030, 90 percent of Canada’s electricity is expected to come from renewable and non-emitting sources. The government will consult on the development of a Clean Electricity Standard that would help achieve a “net-zero clean electricity grid by 2035.”

Clean electricity production must advance rapidly to meet demand, given that Canada signed the Global Memorandum of Understanding for Zero-Emission Medium- and Heavy-Duty Vehicles (ZE-MHDVs) in 2021. Parties committed to working together to enable such vehicles to reach 30 percent of sales of new MHDVs by 2030, and 100 percent by 2040.

In July, the federal government announced another round of consultations on plans to lower GHG emissions from fertilizer use to 30 percent below 2020 levels by 2030. The idea was first proposed in the December 2020 document “A Healthy Environment and a Healthy Economy.”

A 2021 report by Meyers Norris Penny commissioned by Fertilizer Canada found that reduced fertilizer use would result in lower yields and cost growers $48 billion in lost farm income over the next eight years.