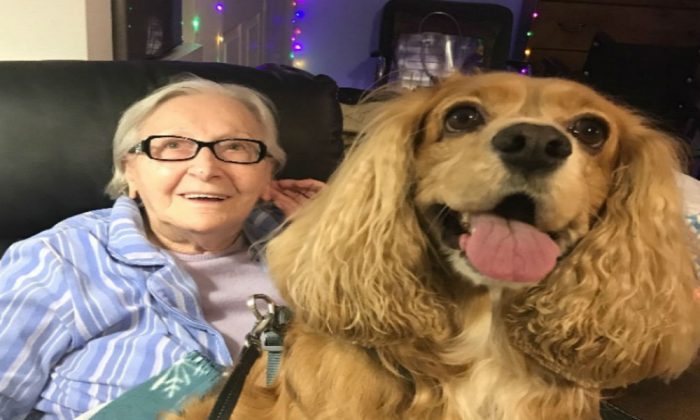 Sally Kelly, a 96-year-old Los Angeles resident who claims she is facing eviction for not paying for services she says her living facility haven't provided to her. (#JUSTICEFORSALLY, 96, LEGAL FUND/GoFundMe)
Crime and Incidents

A 96-year-old Los Angeles resident could face eviction on Christmas Eve after she allegedly asked the nursing facility where she lives to credit her for services she wasn’t receiving, her daughter says.

Sally Kelly requires help for almost all of her daily tasks after she suffered two strokes and two broken hips—showering, using the bathroom, and moving around her apartment.

Her daughter, Audrey Kelly, set up cameras in her room at City View Villa for her own safety, which captured just how long it took the senior living facility to respond to her calls.

In one instance, the video shows her waiting 58 minutes to respond to a request for assistance using the bathroom, CBS LA reports, but the video stopped recording after about an hour. Her daughter alleges that it took them about two hours to respond to her call.

In another recording, she waited 38 minutes before the recording stops, CBS LA reports.

And her daughter says that’s not the only problem they’re having with the facility.

Instead, the facility’s executive director responded by telling Sally she needs to take her cameras down, claiming that her filming in her own residence is criminal.

Audrey contacted the LAPD to ask about that statement, and they assured her that installing cameras in her own home was not against the law.

Even after Sally presented them with their response, a GoFundMe page set up by Audrey says they continued to accuse Sally of criminal misconduct.

The nursing facility also refused to credit her for the services she claims they failed to provide, so Sally gave them notice that she would be deducting $7,500 from her monthly rent for the lack of services, the GoFundMe page states. After that, they threatened her with eviction, it says.

A GoFundMe page set up to raise money for Sally’s legal expenses says the facility plans to serve her another eviction notice for “inappropriate behavior” if she wins the first court case.

Despite the threat of eviction, Audrey told CBS LA that they aren’t going to remove the video cameras.

One DSS report over a complaint of an unlawful eviction concluded that, after interviewing random residents, “residents’ needs are being met and that staff provide sufficient care to residents.”

CityView did not respond to CBS LA’s requests for comment.