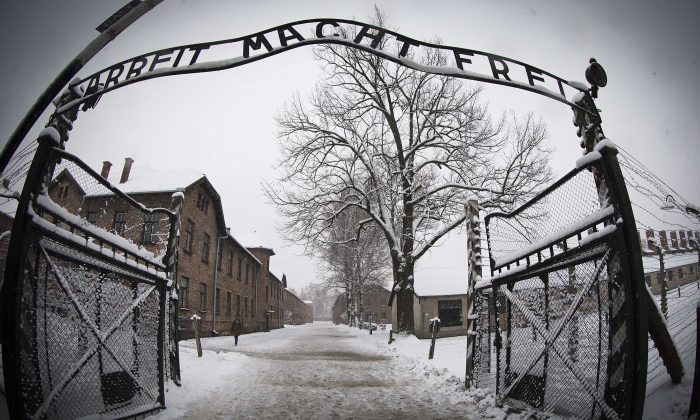 A woman walks through snow near the entrance to the former Nazi concentration camp Auschwitz-Birkenau with the lettering 'Arbeit macht frei' ('Work makes you free') in Oswiecim, Poland, on Jan. 25, 2015. (Joel Saget/AFP/Getty Images)
Europe

BERLIN—A German court says a 95-year-old man will go on trial next month on 3,681 counts of accessory to murder for allegedly serving in the Nazis’ Auschwitz death camp.

Hubert Zafke is accused of working as a medic in Auschwitz in an SS hospital. Prosecutors argue that in that role, the former SS sergeant helped the death camp function.

An appeals court in December ruled he was fit for trial, though the Neubrandenburg state court said Monday that when his trial opens Feb. 29, judges will have to assess whether he needs special accommodation.

Zafke’s attorney insists his client did nothing criminal at Auschwitz.

Another former SS man, 94-year-old Reinhold Hanning, is going on trial Feb. 11 in Detmold on accusations he served as an Auschwitz guard from 1943-1944.