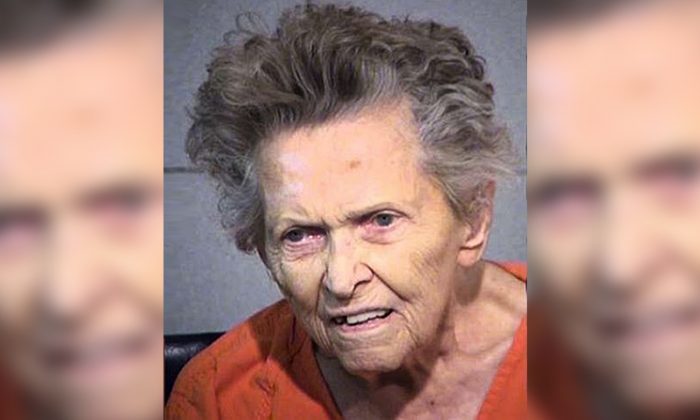 Anna Blessing allegedly shot and killed her son for suggesting she needed to move to an assisted-living community. (Maricopa County Sheriff's Office)
US News

A 92-year-old Arizona woman murdered her 72-year-old son because she thought he was planning to put her into a nursing home.

Anna Mae Blessing had been living with her son and his 57-year-old girlfriend for six months at their condo in Fountain Hills, a suburb northeast of Phoenix.

The couple had been thinking about moving Blessing to an assisted living facility. Blessing told Maricopa County Sheriff’s Deputies that her son had told her she “had become difficult to live with,” AZCentral reported.

According to a Maricopa County Sheriff’s Office report (pdf), Blessing had been contemplating her actions for several days after learning of her son’s intentions to move her.

On Monday, Blessing hid two pistols in the pockets of her robe and proceeded into the master bedroom where her son and his girlfriend were resting, according to court records (pdf).

“You took my life, so I’m taking yours,” Blessing reportedly said as she shot her son twice. One shot struck his neck and the other, his jaw.

Her son’s girlfriend grabbed Blessing, knocking the gun from her hand. Blessing drew the other pistol and tried to shoot the girlfriend, who was able to wrestle the second pistol away from the elderly woman.

The girlfriend called the Maricopa County Sheriff’s Office who arrived at the scene to take Blessing into custody.

Records show that sheriffs had responded to a domestic violence call at the residence before this incident, and that the “frequency/intensity of DV [domestic violence] was increasing.”

No further details were available.