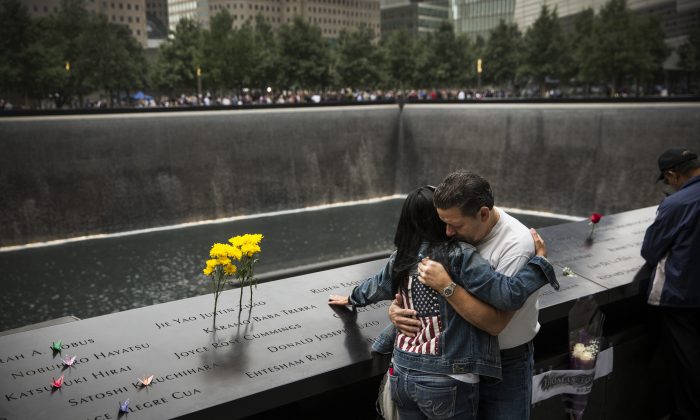 NEW YORK—Earphones plugged in, staring into the fenced off area where only 9/11 families could enter, 50-year-old Greg Packer paid his respects on Thursday at the World Trade Center site.

Despite not being on the guest list for New York City’s main commemoration event, he listened through live streaming on his cellphone for nearly four hours to the reading aloud of every one of the nearly three thousand names of those who died in the terrorist attacks 13 years ago.

“How am I feeling? Numb,” said Packer, a retired highway maintenance worker from Huntington, Long Island. “I feel numb because nothing has changed in 13 years. Nothing.”

“You have a beautiful new tower, but it’s not the same,” he said, referring to One World Trade Center, which saw the finishing spire go up this past year.

“This beautiful tower came at the expense of 3,000 Americans who were lost in three different places,” he continued, referring to the World Trade Center, the Pentagon, and a field in Pennsylvania, where a fourth plane crashed bound for Washington. “This is not a tourist attraction, it’s a cemetery.”

Americans and tourists alike gathered at the Sept. 11 memorial Thursday to honor the deceased. The anniversary of the attacks came just one day after President Barack Obama announced America would lead a coalition to destroy ISIL, the Islamic State of Iraq and the Levant, a terrorist group that succeeded al-Qaeda and has risen quickly as a potential threat to the United States.

After hearing Obama’s resolution, many New Yorkers expressed relief but felt that the move might have come too late after two American journalists were brutally beheaded in recent weeks.

“I like his strategy but he should have done it at the beginning. He should have just never waited,” said 17-year-old Isaiah Bermudez, a high school senior and part of an FBI Exploring program. “The country’s on edge for the next couple of months. We don’t know what’s gonna happen.”

“I’ll believe it when I see it,” said Packer of Obama’s plan. “He’s been talking a lot about eliminating ISIS, but Obama has done nothing to ease the situation, and all he’s done is lead Americans into the fire.”

Twenty-two year old stand-up comedian Brad Belanger agreed: “I feel like maybe we should have taken care of it a long time ago. They put up these videos of cutting people’s heads off … they edited it to be like an American action movie—that should have been enough of an initiative to just go over there and take care of it.”

Mayor Bill de Blasio announced his support for Obama’s strategy Thursday but cautioned against too much U.S. military involvement. “There’s a long history here of, unfortunately, you know, this country becoming involved militarily in ways that backfired, so I think there has to be a care given, and I think the president was right to be deliberative.”

“We should draw the line at boots on the ground. I think we will greatly regret it if we ever go in in that deeper way—in Syria in particular,” de Blasio added.

They are loved, missed, and they will be remembered. Those were the words echoing again and again through the Memorial plaza Thursday.

“Thirteen years and it still feels like yesterday,” said Renee Zayas, speaking about her late cousin Manuel Del Valle, Jr., who died in the attacks.

For some, the ceremony was a rare chance to pay respects, as many families have no graves to visit. “We don’t really have a place to go,” said Jo Aquaviva. Her son, Paul Andrew Aquaviva, had an office on the 103rd floor of the North Tower. His body was never found.

One mother asked for help with naming some part of her neighborhood after her son, de Blasio said, during a short talk with media after the event, adding, “We’re going to see if we can help her do that.”

Across the street, at the Burger King between Liberty Street and Trinity Place, 44-year-old guest relations director Felicia Smalls lost six friends in the attacks, and many of her co-workers left due to what happened.

“They were scared to come back,” said Smalls.

Firefighters drove up from various states and flew from countries like France and Germany to honor their brothers who died saving people in the Twin Towers.

For 39-year-old firefighter Brian Sullivan, it was his sixth or seventh time coming up from Florida. He said that attending the memorial reminded him “you gotta appreciate what you got, because you never know when could be your last day.”

About the impending threat of ISIL, he said, “Unfortunately in terror acts, you gotta be one step ahead. There’s evil out there, you just gotta try to stop the evil.”

Fire Marshal Ron Bucca was honored Thursday at the NYC Fire Museum, at an annual luncheon, where they unveiled a black marble memorial tiled with photos of 343 firefighters who died during the attacks. Bucca’s daughter and son gave speeches about the legacy their dad had left them, after falling to his death from a fire escape in a collapsing building. Bucca was the only fire marshal to perish in the attacks.

Bucca’s daughter, Jessica, 36, spoke of fond memories and how her forward-thinking dad even helped her sign up for a 401k program at her first job.

She described the conditions her father had to fight through in an interview, “My dad almost made it to the 79th floor, in smoky, not good conditions. He knew what he had to do.”