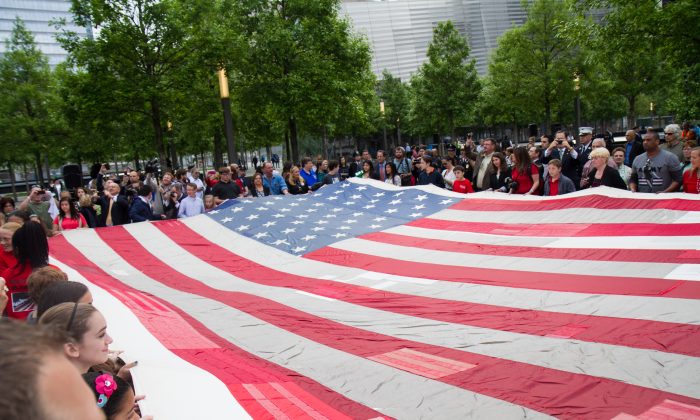 Firefighters, police and members of the public, hold the National 9/11 Flag at the ceremony for the 9/11 Memorial Museum in New York City on Wednesday, May 21, 2014. The ceremony marked the opening of the National September 11 Memorial Museum. The flag was flying from a building near the World Trade Center on Sept. 11, 2001. It was later found shredded in the debris of ground zero and stitched back together seven years later by tornado survivors in Greensburg, Kansas. (Benjamin Chasteen/Epoch Times)
New York

NEW YORK—The smell of fresh gravel permeated the bordering blocks of the 9/11 Memorial Museum, as traffic guards facilitated crossings for pedestrians and construction caterpillars. The bronze parapets by the twin memorial pools, each an acre in size, were surrounded by a large crowd. In the distance, a meandering line of tourists and locals waited by the entrance as the museum let the public in for the first time on May 21. They waited with mixed feelings.

“I’m against the whole tourist-attraction aspect of it … it’s unsettling,” said John Herbst, a real estate salesperson who worked at One Liberty Plaza six months before the attack. “But it needs to be seen, so I’m torn.”

The museum’s $24 entrance fee, its gift shop, its location near a repository of unidentified remains, and its Islamic reference in a terrorism education video, have sparked much controversy recently. But on its first public opening, it received a positive response from the public for the most part.

“Although the price is a bit high, I think it’s worth it,” said Alvin, a New Yorker who witnessed the second plane crash from Columbus Park. “It’s a nice memorial. I know there’s a lot of controversy around the gift shop, but I thought it was okay since it wasn’t tacky.”

“You learn about the attack a lot in school, but I walked away from this knowing the stories of real people,” said Keely Sanders, 16, from Long Island.

The museum’s core exhibitions are located seven stories below ground, in the very space that once served as the foundation for the Twin Towers.

Visitors descended into a dark corridor, filled with voices recalling memories from Sept. 11, 2001.

The museum occupies 110,000 square feet on the 16-acre trade center site. It currently holds 100,000 artifacts varying from photographs, videotapes, and oral histories, to recovered property—and it is still actively collecting.

The plaza and museum together cost $700 million to construct, with the help of a subsidy that consisted of $390 million in tax-funded grants. The $24 entrance fee and gift shop products are expected to generate $40 million a year, which will cover most of the $60 million it will cost to run the museum annually.

Lilian Couto, 36, a tourist from Rio de Janeiro, Brazil, said she appreciated how the gift shop focused on positivity. “It sold things that represent hope and beauty amid tragedy,” she said. “But I am not American, maybe it is different.”

Others, however, found the gift shop appalling. “I don’t really approve of that. If they’re going to use the money to keep the museum going, I see a point,” Herbst said. “But this is sacred ground, they shouldn’t have a gift store.”

There is a repository near the museum that contains unidentified remains from the disaster. Maureen Fanning, a firefighter widow, left the museum with tears in her eyes on Thursday when it was opened to family of victims. She was unable to look at the repository.

“I just think it would be a little too overwhelming today,” she said, unsure when she would return. “It’s a lot to digest, to absorb. Not anytime soon.”

“But he’s here. I know he’s here,” said Monica Iken, a museum board member who has never received her husband’s body.

For other visitors, the museum and memorial is a reminder of the importance of a career in justice.

“It’s sobering to be here,” said Steve Zak, 19, a sophomore at the United States Naval Academy in Annapolis, Md. “Nine eleven was one of the reasons why I came to the naval academy.”

With reporting by The Associated Press