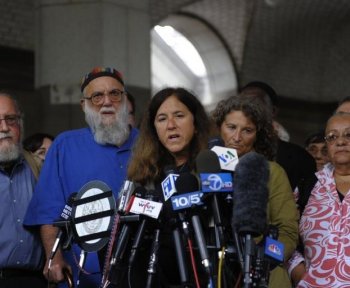 Donna Marsh O'Conner, national spokesperson for September 11th Families for Peaceful Tomorrows, who lost her 29-year-old daughter Vanessa on 9/11, joins representatives of over 40 groups as they express support for allowing a Muslim cultural center to built near ground zero during a news conference in Lower Manhattan August 25. (Timothy A. Clary/Getty Images)
US

9/11 Families Join In Support of Mosque Near Ground Zero

Annie Wu
Annie Wu joined the full-time staff at the Epoch Times in July 2014. That year, she won a first-place award from the New York Press Association for best spot news coverage. She is a graduate of Barnard College and the Columbia University Graduate School of Journalism.
View profile
Follow
biggersmaller
Print
NEW YORK–As tensions build over the proposed construction of an Islamic community center near ground zero, new coalitions have organized to protect the structure from the growing opposition to its completion.

On Wednesday, representatives from several of the over 40 organizations that joined the New York Neighbors for American Values spoke at a rally near City Hall to announce the establishment of their new coalition, which supports the building of Park51 under the “core American values of religious freedom, diversity, and equality,” said Susan Lerner, director of Common Cause New York. Common Cause is a government watchdog group.

Donna O’Conner, who lost her pregnant daughter in the 9/11 attacks and is the spokeswoman for September 11th Families for Peaceful Tomorrows, said in a press statement, “We cannot bring back the family members we lost on 9/11 but we can try to recoup what is best about America. We are firm in our commitment to civil liberties and religious freedom.”

At the rally, she reaffirmed her support for Park51: “We [9/11 families] 100 percent fully support the Islamic cultural center in New York City.”

Donna Lieberman, director of the New York Civil Liberties Union (NYCLU), a civil rights advocacy group, emphasized that religious freedom in America should not exclude any group from enjoying those rights. “We reject the refrain of freedom of religion, but not in my backyard…preventing Muslims or any group…from practicing their faith is unconstitutional and goes against the very core of America.”

She disagreed with the assumption that Muslims in America are the same as the Islam extremists who conducted the 9/11 attacks. “We unequivocally reject…the fear-mongering, the crude stereotypes meant to frighten and divide us.”

Lieberman noted that given the proximity of the NYCLU office to the World Trade Center towers, many NYCLU workers have felt the impact of the attacks first-hand, but it does not change their belief in defending “the rights of all religious denominations.”

She continued, “In conversations about terrible tragedies, 9/11…we know that those who lost loved ones have a special place in the conversation, and when they stand up for American values, even though it may hurt, it’s really important that all of America hears that.” When one religious group is threatened of its livelihood, all of us suffer, she argued.

Rabbi Arthur Waskow, director of the Shalom Center, expressed that blocking the building of Park51 indicates discrimination and prejudice, which he described as intolerable in America. Furthermore, he believed building Park51 would demonstrate the nation’s commitment to its founding principles. “It is right, it is wise for them to do that [construct Park51] because by doing that, they are the beacon to New York City, to America, to the world, a beacon of the best.” Park51, which will house a swimming pool, office space, an auditorium, and other facilities, will reveal “an Islam that seeks peace, that practices dialogue,” Waskow said.

Abdul Baqi, director of the Islamic Leadership Council, believes that Park51 can boost much-needed economic growth in the community. He also expressed that Muslims were victims of the 9/11 attack too. “We have lost people, loved ones, friends and family, and now we are being doubly victimized by people trying to depict us in one broad stroke of the brush, as something evil.” For years, Muslims have practiced their faith in New York. In fact, there was a praying center in the second World Trade Center Tower, Baqi noted.