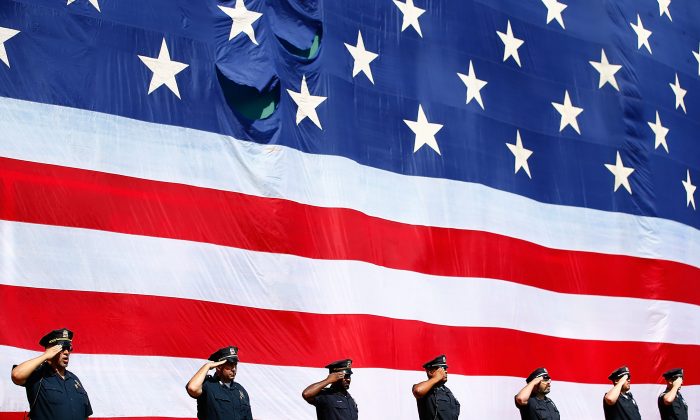 Members of the Boston Police Department line up along the Green Monster during a pregame ceremony remembering first responders from 9/11 prior to the game between the Boston Red Sox and the Baltimore Orioles at Fenway Park on September 10, 2014 in Boston, Massachusetts. ((Jared Wickerham/Getty Images)
US

Six out of 10 Americans have doubts about the official government account of what happened on September 11, 2001, according to a new poll.

The poll by ReThink911, a global public awareness campaign, found that 38 percent of Americans have some doubts about the official account while 12 percent are unsure about it and 10 percent don’t believe it at all.

The campaign is focusing in part on the fact that a third tower fell on 9/11, including having a billboard in Times Square and in a variety of transit and advertising spots in other cities that pose the question.

Of those polled, 46 percent weren’t aware that a third tower collapsed and of those who were aware, only 19 percent knew the name of the building.

41 percent of the people who saw the footage said they support a new investigation into Building 7’s collapse while 21 percent oppose it.

The new poll results came out this week, just days before the anniversary of 9/11.

One of the biggest pieces of news surrounding the anniversary is a rumored planned attack by the ISIS terrorist group.

But U.S. officials said on Wednesday that they were not aware of a credible threat of a potential attack in the United States by the Islamic State.

On the other hand, President Barack Obama is moving to deepen the U.S. military role in the volatile Middle East, including training and arming Syrian rebels to fight Islamic State militants and potentially expanding airstrikes across the Iraqi border into Syria.

Obama was to outline his plans for battling the Islamic State group in a high-stakes address to the nation Wednesday night. Ahead of his remarks, congressional leaders grappled with whether to support his request to arm the Syrian opposition and if so, how to get such a measure through the fractured legislature.

Obama’s plans amount to a striking shift for a president who has steadfastly sought to wind down American military campaigns in the Middle East and avoid new wars. That stance has been notable in Syria, where Islamic State militants have taken advantage of the instability created by a three-year civil war and now operate freely in areas near and across the Iraqi border.

Earlier this summer, Iraq’s government asked the U.S. for help in confronting the militants, and Obama approved airstrikes within Iraq’s borders. He may now authorize strikes in Syria as well and has told people briefed on the White House plans in recent days that the U.S. must view the IslamicState as one group, not two separate entities split by a border.

Separately, the White House announced Wednesday that it was providing $25 million in immediate military assistance to the Iraqi government as part of efforts to combat the Islamic State.

Adamantly opposed to putting American combat troops on the ground, Obama will call for increased training of Iraqi security forces and the provision of arms shipments to vetted Syrian opposition fighters in order to help both groups in their fight against the militants.

Some of Obama’s own advisers, including former Secretary of State Hillary Rodham Clinton, pressed him to arm the rebels early in their fight against Syrian President Bashar Assad. But Obama resisted, arguing that there was too much uncertainty about the composition of the rebel forces. He also expressed concern about adding more firepower to an already bloody civil war.

The president eventually approved a small CIA-run program to arm the rebels, but the effort he now seeks is broader and would be run by the Pentagon in countries near Syria’s borders. Obama asked Congress for approval of such a program earlier this year, but the plan stalled on Capitol Hill.

In the hours before the president’s remarks, the Treasury Department said that Obama’s strategy would include stepped-up efforts to undermine the Islamic State group’s finances. David Cohen, Treasury’s undersecretary for terrorism and financial intelligence, wrote in a blog post that the U.S. would be working with other countries, especially Gulf states, to cut off the group’s external funding networks and its access to the global financial system.