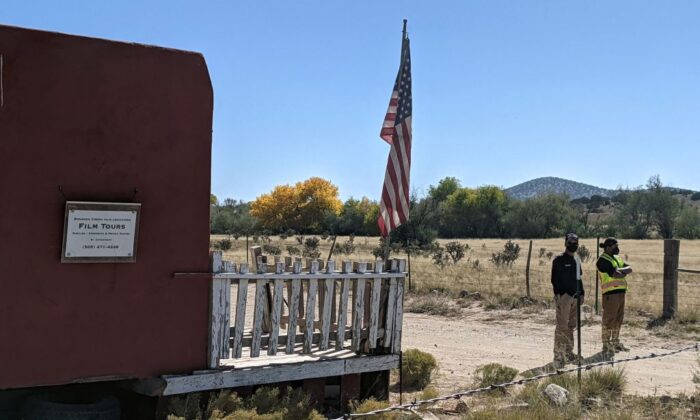 An audio recording detailing the conversation of a 911 call made from the set of a film where one person was fatally wounded and another seriously injured in an accidental shooting has been released.

The callers confusion was clear and background sounds show the melee as people raced to try and get help to the injured parties.

After a woman, thought to be script supervisor Naomi Mitchell begins the call, a male voice comes on the line and advises the operator that he believed the injured people to be alert, and stated he thought it was “one wound on two individuals.”

Cinematographer Halyna Hutchins was killed and director Joel Souza was injured in the incident, when a prop gun misfired.

An assistant director unwittingly handed Alec Baldwin a loaded weapon and told him it was safe to use in the moments before the actor fatally shot the cinematographer, court records released Friday show.

“Cold gun,” the assistant director announced, according to a search warrant filed in a Santa Fe court.

Instead, the gun was loaded with live rounds, and Baldwin pulled the trigger Thursday on the set of a Western, killing Hutchins.

Souza, who was standing behind her, was also wounded, the records said.

The Santa Fe County Sheriff’s Office obtained the warrant Friday so investigators could document the scene at the ranch outside Santa Fe where the shooting took place.

They sought Baldwin’s blood-stained costume for the film “Rust” as evidence, as well as the weapon that was fired, other prop guns and ammunition, and any footage that might exist.

The gun was one of three that the film’s armorer, Hannah Gutierrez, had set on a cart outside the wooden structure where a scene was being acted, according to the records.

Assistant director Dave Halls grabbed the gun from the cart and brought it inside to Baldwin, unaware that it was loaded with live rounds, a detective wrote in the search warrant application.

It was unclear how many rounds were fired.