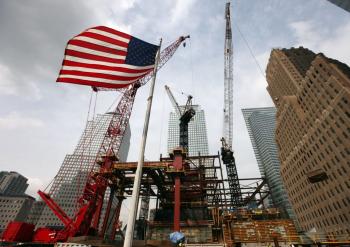 Every day, thousands of tourists flock to the World Trade Center to view the site where 2,750 people lost their lives, eight years ago on September 11, 2001.

The yearly observance of 9/11 includes ceremonies to remember the workers, firefighters, and passengers that died in the attacks. The four planes that were hijacked were all destroyed with passengers and terrorists inside. Two planes flew into the World Trade Center, one into the Pentagon, and one went down near Shanksville, Pennsylvania. A total of 2,993 lives were lost.

Since 9/11, the United States has launched into a global war on terror, including two ground wars in Iraq and Afghanistan, where troops are still fighting to this day.

Throughout the year, but especially on 9/11, many people look to pay their respects to those whose lives were lost on that catastrophic morning. Construction on the lot where the Twin Towers stood is still underway.

The site is still the most noticeable gap in the Manhattan skyline. The fenced-off block is littered with cranes, construction materials, and filled with workers. It’s impossible for the general public to set foot on the actual site where the towers once stood. But two places have been opened across the street in lieu of a formal memorial site.

Many tourists and locals bring flowers and photos to the World Trade Center, although there is no official area for people to pay their respects. Firefighters from Ladder Company 10 have taken matters into their own hands. A plaque and a large poster with photos of the firefighters who lost their lives saving victims are put up on the side of their station. People have also lit candles, dropped off flowers, and left letters for those who were lost.

The 9/11 Preview Memorial Site has also opened its doors to give people a sneak peek of the content that will be going to the new World Trade Center compound. The site is open to the public with free videos, pamphlets, and a viewing of a scale model showing the future buildings that are being constructed across the street.

“What we hope to provide with the 9/11 Memorial Preview Site is a place for visitors to learn about the museum that is still under construction and help them understand what is being done here,” said Michelle Breslauer, 9/11 Preview Memorial Site’s communication manager. “We are also encouraging people to participate in the creation of the museum by contributing photos, remembrances, or donations.”

On Sept. 11, the Tribute World Trade Center Visitor Center will be closed to the public for a private gathering for family members of those who lost their lives. The City of New York will be holding an observance around the corner at Zucotti Park. The names of the victims will be read out loud with moments of silence at the times when the planes crashed into the towers and when the buildings collapsed.

In Pennsylvania, the Eighth Annual Anniversary Commemorative Service will be held to recognize the loss of those who died in the plane that went down outside of Shanksville. The National Park Service has organized the event near the crash site by Skyline Road, where a memorial is in the works.

There has been no official word on any events to be held at the Pentagon.