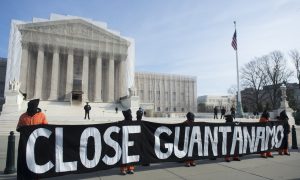 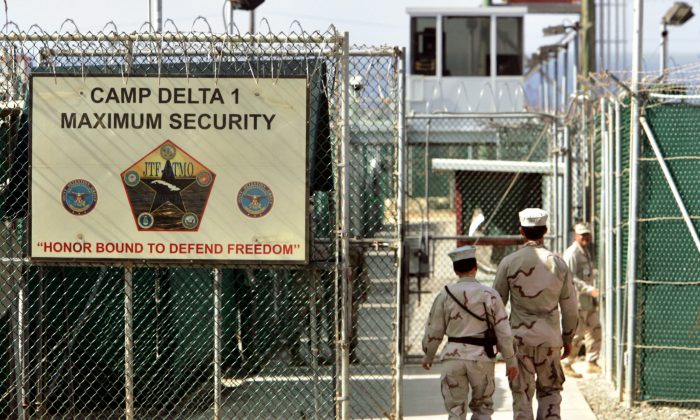 US military guards walk within Camp Delta military-run prison, at the Guantanamo Bay US Naval Base, Cuba. (AP Photo/Brennan Linsley, file)
US

$900,000 per inmate is spent at the Guantanamo Bay prison camp in Cuba, according to a new report.

Reuters reported on Friday that Pentagon estimates spending $150 million per year to operate the facility and court system. This means that with 166 prisoners in the system, taxpayers are spending around $903,614 for each.

“That … may be what finally gets us to actually close the prison. I mean the costs are astronomical, when you compare them to what it would cost to detain somebody in the United States,” he added.

Of the 166 prisoners there, around 100 have recently gone on a hunger strike, citing poor conditions there.

Reuters points out that the prison costs so much is because the United States and Cuba have virtually no ties, meaning that everything–from food, goods, construction materials, and personnel–must be shipped there.

The U.S. opened the facility in 2002 to house terrorism suspects amid a push in Afghanistan and later in Iraq. It is unclear how much has been spent overall in the past 11 years to keep the prison running.

“I don’t know if I’ve ever seen an estimate but it is certainly more than $1 billion by a comfortable margin, I would say, probably more than $2 billion,” Gude said.

President Barack Obama this week renewed calls to close down the camp for a number of reasons, including cost.

“I think it is critical for us to understand that Guantanamo is not necessary to keep America safe. It is expensive. It is inefficient,” Obama said at a conference, according to a live feed.

Obama described the prison as “not sustainable,” adding that “the notion that we’re going to continue to keep over 100 individuals in a no-man’s land in perpetuity, even at a time when we’ve wound down the war in Iraq, we’re winding down the war in Afghanistan, and we’re having success defeating al-Qaeda core.”