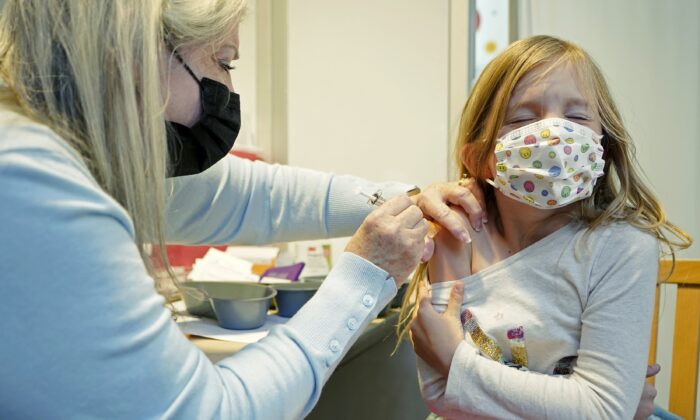 A nurse volunteering at the University of Washington Medical Center gives the first shot of the Pfizer COVID-19 vaccine to a 7-year-old girl in Seattle, Wash., on Nov. 9, 2021. (Ted S. Warren/AP Photo)
Executive Branch

The rollout of Pfizer’s COVID-19 vaccine for young children is going well, with over 1.6 million either getting it already or scheduled to get it, Biden administration officials said in a virtual press briefing on Wednesday.

Over 900,000 children between the ages of 5 and 11 will have gotten a shot of the vaccine by the end of the day, White House COVID-19 response coordinator Jeffrey Zients said.

The vaccine was cleared for that age group on Nov. 2.

An average of 300,000 shots have been administered to the children per day across the last 7 days. As an indication of the demand, 700,000 of the kids are scheduled to get a shot at pharmacies in the coming days.

The vaccine is also being administered at schools, malls, clinics, children’s hospitals, and doctor’s offices.

There are approximately 28 million children between 5 and 11 in America.

The Biden administration has secured enough kid-sized doses, one-third the amount of the normal shot, for all of them.

Some experts, though, have said that many of the kids don’t need the shot because they’re at little risk of severe disease when they contract COVID-19. Federal officials disagree, pointing to the small number of hospitalizations and deaths among the age group and asserting the benefits of vaccination outweigh the risks.

“While children remain more resilient than adults to this virus, they still remain at risk. And with the help of vaccines, we can prevent COVID-19 and many other diseases that were once fatal,” Centers for Disease Control and Prevention (CDC) Director Rochelle Walensky told reporters.

She said she was “hearing from parents who are breathing a sigh of relief” due to the expansion of which age groups can get Pfizer’s jab.

Part of the reason outside advisors recommended authorization of the vaccine for the young kids was a projection that it would lessen the chances they would miss school. Children in some areas of the country must stay home after testing positive for COVID-19, the disease caused by the CCP (Chinese Communist Party) virus.

But some of the advisors cautioned against vaccinating every child, noting that heart inflammation post-vaccination is much higher among youth than adults, particularly among young males, and that children who have survived COVID-19—estimated at 40 percent of those 5-11 by the CDC—may not need a shot.

“It’s safe to assume that vaccinating a healthy child would take his extremely low risk of serious disease and drive it down even lower,” Drs. Nicole Saphier and Marty Makary wrote in an op-ed this week.

“There’s an important exception, though: If a child already had COVID, there’s no scientific basis for vaccination,” they added, pointing out how none of the previously infected, including those who didn’t get a jab, in the Pfizer trial contracted the illness.

The CDC has acknowledged post-infection immunity, widely known as natural immunity, but for now it says everybody who has it should still boost their protection with a vaccine.