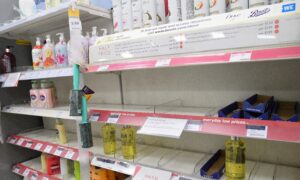 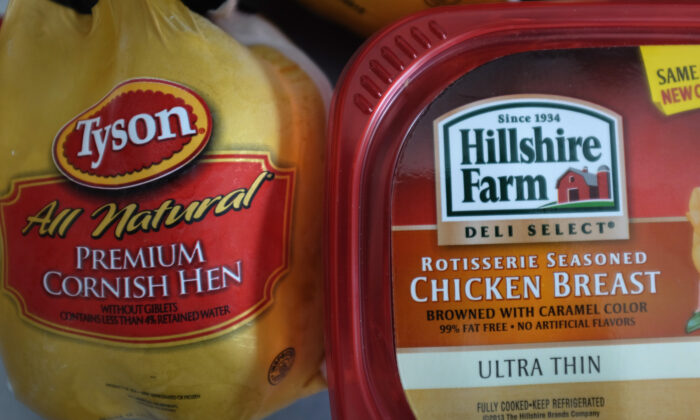 In a Tyson Goodlettsville, Tennessee meat-processing plant, the Health Department found that 90 employees were infected with the CCP virus. (Joe Raedle/Getty Images)
Companies

Ninety employees at a Tyson Foods meat-processing plant in Tennessee tested positive for the CCP virus. Meanwhile, the company is still running and stepping up its safety measures.

“We’ve had some team members test positive for COVID-19,” the company said in a statement published by WSMV. “And in each case we’re following guidance and requirements from the CDC, the U.S. Department of Health, the relevant local health department, and the USDA.”

The company added that the Metro Public Health Department (MPHD) “has been satisfied with the measures we have in place.”

MPHD which oversees Davidson County—where Goodlettsville is located—found out last week about the mass-contamination after an in-depth investigation into the health and working conditions of the employees.

“The U.S. Department of Agriculture, Tennessee Department of Health and MPHD are working directly with Tyson officials on the steps to mitigate the threat of the disease as part of plant operations,” the health department said, according to Fox 4 Nashville.

In a statement on April 17, Tyson said the safety measures it is taking include deep cleaning their facilities and other public spaces, restricting visitors from entering the compound, segregating workers by employing dividers, conducting regular checks on the workers’ temperature, installing infrared walk-through thermometers, separating working stations, adjusting shifts to have less physical interaction between employees, and providing protective equipment and clothing.

Tyson Foods spokesman Gary Mickelson said three of the deceased employees worked at the company’s chicken processing plant in Camilla, while the fourth person worked in a supporting job outside the plant. Two other workers died in Columbus Junction, Iowa, Mickelson said. He did not say how many employees have been infected.

“We understand that people are anxious during this very challenging time, which is why we believe information is the best tool for combating this virus,” Hector Gonzalez, Tyson’s senior vice president for human resources, said in the statement on April 17. “We want our team members to express their concerns so that we have an opportunity to address them timely and properly.”

The Retail, Wholesale and Department Store Union, which represents 2,000 workers at the plant, said that many employees were sick or quarantined. “It’s too little too late here,” said Edgar Fields, president of the union in a statement last week.