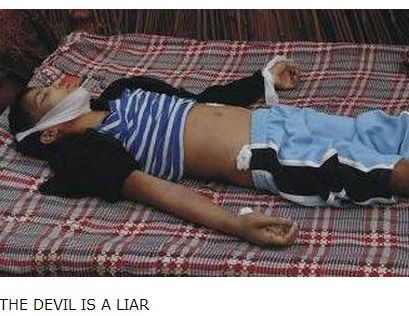 A screenshot of Snopes.com shows the donation scam.
Tech

A viral Facebook post saying a “9-year-old is gang raped” and shows a bandaged child lying down is just a scam.

However, it’s just a commonly used scam that doesn’t do anything, and is considered one of the oldest type of hoaxes used on the Internet. “Liking” or sharing a post on Facebook doesn’t lead to donations.

The fake post starts out with “THE DEVIL IS A LIAR. 9 YEAR OLD GIRL GANG RAPED!! A MUST READ IF YOU HAVE A HEART.”

Hoax-debunking website Snopes.com says that the photo used in the post is Nazia Masih, a 12-year-old girl who died in Pakistan due to blood poisoning–not rape–in 2010. Her family said her employees tortured and abused her.

The text included in the article involves a 9-year-old Pakistani girl who was raped by several men in January 2013. She was left in critical condition in the hospital. The Pakistan Tribune wrote at the time: “Her mother told police that she had found the girl near their house. She was bleeding and close to fainting. She said when she was taking her to the police station, when one of the kidnappers stopped her and threatened to kill her if she informed the police.”

According to Snopes, “The notion that various business entities will pony up money for a good cause every time someone forwards, texts, likes, posts, shares, or otherwise disseminates a particular message is one of the longest-running hoaxes on the Internet.”