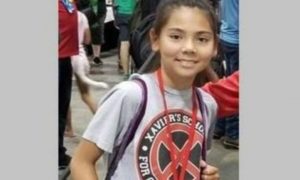 A 9-year-old Chicago boy who was reported missing on Jan. 8, reunited with his father on Wednesday.

Family members couldn’t locate Michael Campbell, a fourth-grader, so they reported him missing.

The boy’s father, Chris Campbell, told WGN-TV that the boy was at a friend’s house during the search, which lasted through the night.

Police officers used spotlights and other equipment to search near Campbell’s home, which is about a block away from his school, Harvard Elementary School, in the Englewood neighborhood, reported CBS. Some of his belongings were found in an alley.

The boy went to the friend’s because he was afraid to head home after school on Tuesday after hearing gunshots in the area.

On Wednesday morning, Campbell reunited with his family.

His mother said he usually returned home no later than 4:15 p.m., prompting his parents to see if he was still at school or was at a friend’s house. Thirty minutes later they tried searching for him but called 911 when they still couldn’t locate him.

“He said he didn’t come home last night when he went by his friend’s house because there was gunfire and he asked the kid’s mother can he stay and they told him he could stay,” Chris Campbell, the boy’s father, told WLS. “He fell asleep after they played video games.”

“I knew everything was going to be okay,” added Allison Campbell, the boy’s aunt. “I prayed and prayed before I got in my car last night, I prayed.”

Chris Campbell said that children in the area helped find his boy.

“All this was about kids,” Chris Campbell said. “No adults gave us any tips. This was children under 12 years old that told us everything.”

He also thanked the police department for their help.

Nine year old Michael Campbell missing since yesterday afternoon is taken to the hospital after being found safe. @cbschicago pic.twitter.com/yqG0Wbpwsm