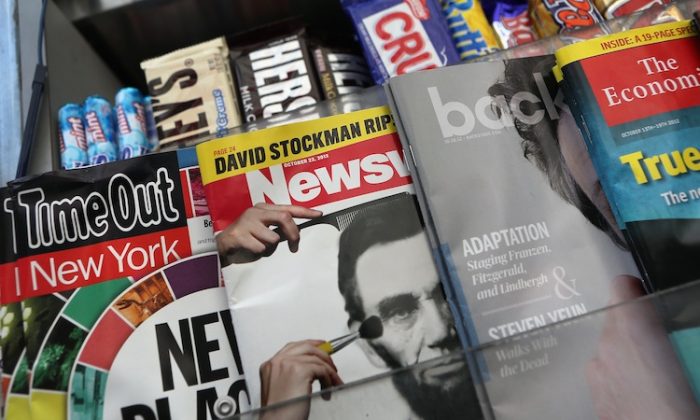 Newsweek Magazine sits for sale at a news stand in New York City. Tina Brown, editor-in-chief of The Newsweek Daily Beast Co, announced on Oct. 18, 2012, that the 80-year-old news magazine will publish its final print edition on December 31 and shift to an all-digital format in early 2013. Staff layoffs are expected. (John Moore/Getty Images)
US

With a growing number of readers transitioning to more diversified and free digital sources for their news, many print publications have started to stumble. Yet the announcement last Thursday that Newsweek magazine was shutting down the presses to go completely digital was a definite shocker.

With Newsweek’s 80 years of magazines about to become historical artifacts, below is a look back at some of the other media companies that have folded over the last decade.

The Spotlight was a weekly newspaper published by the now-defunct Liberty Lobby in Washington, D.C. from 1975 to 2001. Best known for its slant toward populism and nationalism, the newspaper stopped publishing after Liberty Lobby went into bankruptcy in 2001.

Afternoon daily newspaper The Cincinnati Post, also known as The Kentucky Post in Northern Kentucky, ceased its publication in 2007 after a history of nearly 130 years. The Kentucky Post continues as an online media.

Although only launched in 2006, The Baltimore Examiner became one of the two major dailies in Baltimore, reaching over 236,000 readers just a year after its launch. The free newspaper shut down in 2009.

The Rocky Mountain Daily was a 150-year-old Pulitzer Prize-winning Denver newspaper with a circulation of 255,000 in 2006. The shutdown of the paper in 2009 left The Denver Post as the only major newspaper in the Colorado capital. Rocky Mountain’s website is still online today, frozen in February 2009, with its final good-bye messages from the editorial staff.

The Seattle Post-Intelligencer is another century-and-a-half-old newspaper that ceased publication in 2009. It dominated the city of Seattle as one of its two largest dailies along with The Seattle Times until its transition to an online-only newspaper in 2009.

Founded in 1870, the publication was the oldest continuous newspaper in Arizona. By the time Tucson Citizen ceased publication in 2009, its circulation had gone down from 60,000 to 17,000. The newspaper continues online. A few former staff members also together founded the nonprofit online news website TucsonSentinel.com.

U.S. News & World Report, once part of the triumvirate along with Newsweek and Time magazines, was trimmed to a monthly prior to the end of its print publication in December 2010. The magazine now exists only in the digital world.

Founded in 1843, the U.K.’s News of the World was once the best-selling English-language newspaper in the world, reaching 2,606,397 in weekly distribution before it was shut down. News International Chairman Rupert Murdoch, owner of the newspaper, folded the tabloid amid investigations of its alleged involvement in phone hacking and payments made to police officers. The fall of the historic edition sent ripples throughout Murdoch’s mighty empire that includes U.S. holdings such as The Wall Street Journal, The New York Post, Fox News, and 20th Century Fox film studio.

After 80 years of tireless efforts, Newsweek has become one of the most globally recognized news magazines. Despite its prestige in the news world, it was sold for only $1 to tycoon Sidney Harman in 2010 (who died shortly later). On Oct. 18, 2012, it was announced that the magazine would be turning off the presses.