9 People Who Allegedly Double Voted in 2018 Election Are Referred for Prosecution: Officials 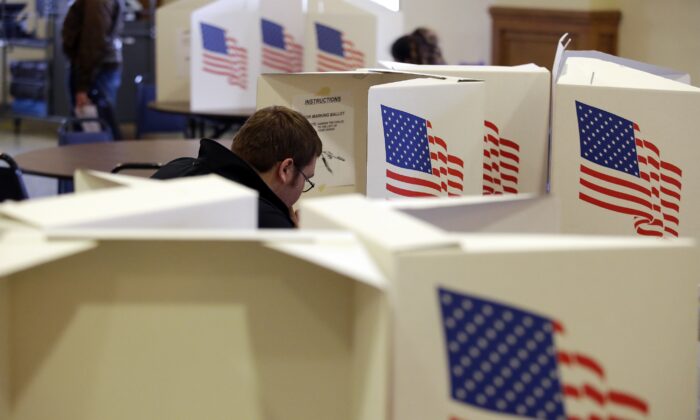 A voter fills out a ballot at a polling station in Des Moines, Iowa on Nov. 6, 2018. (Joshua Lott/Getty Images)
By Zachary Stieber

The nine people were referred to prosecutors in the counties they reside in. None were named.

“One fraudulent vote is too many. It nullifies a legally cast vote,” Iowa Secretary of State Paul Pate said in a statement. “Iowans take the integrity of our elections very seriously and we will not stand for people trying to cheat the system.”

The nine accused voted in a different state before voting in Iowa in the same election, according to Pate’s office. Of the nine alleged instances, four were in Polk county and one each took place in five other counties.

Pate also uncovered 27 other suspected instances of voters casting ballots in Iowa before casting ballots in another state in the same election. That information has been shared with the respective states’ commissioner/board of elections.

The alleged crimes were discovered through Iowa’s partnership with other states through the Electronic Registration Information Center, or ERIC.

The center “is a non-profit organization with the sole mission of assisting states to improve the accuracy of America’s voter rolls and increase access to voter registration for all eligible citizens,” according to its website. “ERIC is governed and managed by states who choose to join, and was formed in 2012 with assistance from The Pew Charitable Trusts.”

The information helps identify voters who moved to a different state, died, or changed their name.

Florida recently joined the center, marking the 30th state that is a member.

“My administration is committed to protecting the integrity of Florida’s voter rolls and preventing election fraud,” said Governor Ron DeSantis said in a statement earlier in December. “As a member of ERIC, Florida is now equipped with more tools to further ensure accurate voter rolls, make voting easier and reduce costs to taxpayers.”

Florida officials said they’d spend $1.3 million to contact potentially eligible voters who are not registered to vote prior to the 2020 elections.

“I have heard strong support for joining ERIC from supervisors of elections all over Florida, and I am excited to provide them with one more tool to serve voters in Florida,” said Florida Secretary of State Laurel Lee in a statement. “Joining ERIC keeps Florida at the forefront of election security and will help us ensure fair and accurate election in 2020 and beyond.”