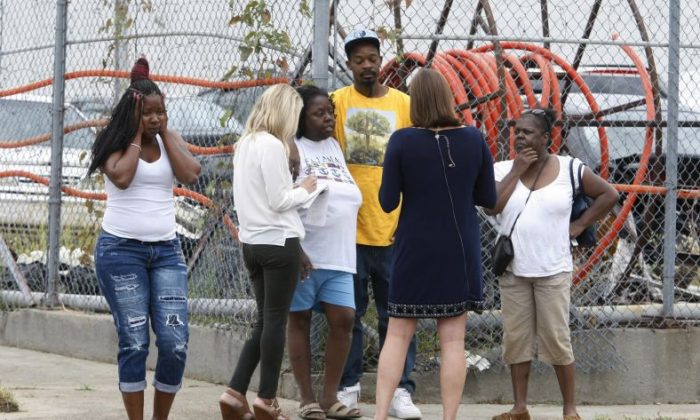 People stand across the street from a home where an early morning fire killed multiple people, including children, Monday, Sept. 12, 2016, in Memphis, Tenn. (AP Photo/Karen Pulfer Focht)
US

MEMPHIS, Tenn.  — Nine people — five children and four adults — died early Monday in Memphis’ deadliest house fire in decades, and one other child is fighting for life at a hospital, authorities said.

Firefighters initially spotted light smoke outside the single-story wood-and-brick home in south Memphis when they arrived about 1:20 a.m. but quickly encountered heavy smoke inside after they entered, Memphis FireServices Director Gina Sweat said.

Fire crews found four adults and three children dead in the home, Sweat said at a news conference. Two other children died after being taken in extremely critical condition to a children’s hospital, she said.

One other child remains hospitalized, said Sweat, who called it the deadliest fire in Memphis since the 1920s. More recently, seven people died in a fire here in 2008, fire department spokesman Wayne Cooke said.

Memphis Mayor Jim Strickland asked for prayers for family members of the dead, who weren’t immediately identified. Some of the victims had signs of smoke inhalation, while others had burns, according to authorities.

“It’s a very sad day,” Strickland said. “We are all in mourning.”

The wooden-frame home, which has a brick facade and bars on some of its windows and doors, is in a poor, working-class neighborhood of south Memphis. A smoke detector was found in the house, but it was damaged and officials didn’t immediately know if it was working at the time, Sweat said.

The fire official also said it wasn’t immediately clear if those inside had tried to escape through the windows. Sweat said window bars present a danger for people trying to escape a house fire, though many window bars have releases that can open them from the inside.

“They could have been simply overcome by smoke and never had an opportunity to escape,” she said.

An exact cause hasn’t yet been determined, though Sweat said the fire apparently began in the living room. While the inside of the home was charred, the house didn’t burn down and fire officials said only part of the house was affected by the fire.

Sweat went to the site early Monday and spoke with firefighters shocked by the loss of life.

“You could feel the heavy in their hearts, and you could see the pain in their eyes,” she said.

Frederick Terrell said he knew the family well and is stunned. He added they used to have neighborhood parties and were a close-knit family.

“It’s hard,” Terrell said. “Those kids were so loving, man.”

Hours after the fire, a woman knelt on the ground outside the home and wept. Other people hugged each other and prayed together along the street. Neighbors stood by, watching as fire officials went about the house, now cordoned by yellow crime scene tape draped on a fence out front. A red motorized children’s toy truck and a red bicycle with no wheels sat outside of the home.

Felecia Wallace, 34, said she has known the family since she was in elementary school. She said she once needed bus fare to get to work and someone who lived in the house just gave it to her.

A fund to help the family has been established at Regions Bank, under the name Toots Family Funds.