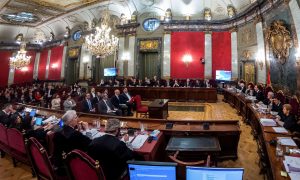 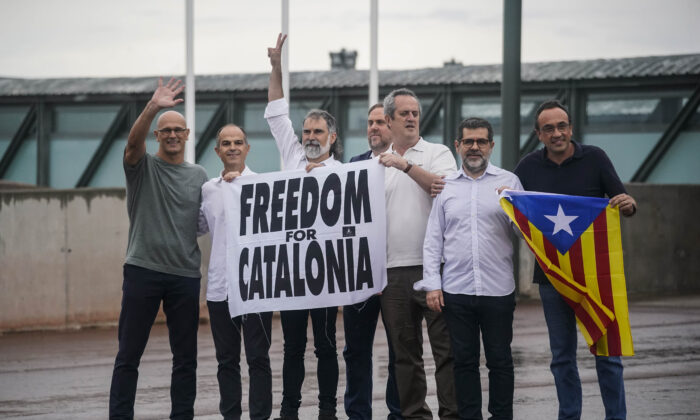 Catalan leaders imprisoned for their role in the 2017 push for an independent Catalan republic, hold a banner and an "estelada" or Catalan pro-independence flag outside Lledoners prison in Sant Joan de Vilatorrada, near Barcelona, Spain, on June 23, 2021. (Joan Mateu/AP)
Europe

MADRID—Nine Catalan separatists pardoned by the Spanish government walked out of prison on Wednesday to the cheers of supporters, leaving behind their lengthy terms for organizing a bid four years ago to make Catalonia an independent republic.

Spain’s Cabinet pardoned them Tuesday in the hope of starting what Prime Minister Pedro Sánchez called a much-needed reconciliation in the country’s restive northeastern region, although fervent local support for the pardoned separatists indicated the problem won’t go away anytime soon.

The freed separatists were met by dozens of cheering, clapping supporters and relatives who had gathered in the rain. The men, released in a group, held up a small banner that said, in English, “Freedom Catalonia,” as well as a Catalan flag. They addressed their supporters in the Catalan language.

“We are aware that today, with our release from prison, nothing has ended,” Junqueras told supporters in a defiant speech. “Prison does not scare us, it reinforces our ideas.”

The Catalan regional president, Pere Aragonès, and the speaker of the Catalan parliament, Laura Borràs, also went to the prison for the separatists’ release.

The pardon canceled the remainder of prison terms ranging from nine to 13 years over sedition and misuse of public funds linked to the 2017 banned referendum. But the separatists won’t be able to hold public office until the end of their sentences and they could go back to prison if they break Spanish law again, the decree said.

Despite polls showing that many people in Spain were against the pardons, Sánchez has defended them, arguing that they are popular in Catalonia and that freeing the separatists will be a fresh start for relations between central and regional authorities.

The political divisions were on full display Wednesday at the nation’s parliament. Conservative opposition leader Pablo Casado called for the prime minister’s resignation for issuing the pardons without consulting lawmakers.

“You are applauding an unfortunate day for Spain’s democratic history, you are throwing the fate of the country into the hands of the separatists,” Casado said, accusing Sánchez of lying because the Socialist leader had vowed not to make concessions to separatists when he came to power.

Sánchez responded saying the decision to issue pardons was “brave, restorative, and in favor of coexistence.”

Catalan separatist legislators called for the government to take a step further and urged it to follow the “Scottish way,” in reference to Scotland’s 2014 independence referendum that was authorized by the British government. Voters in Scotland elected to remain in the United Kingdom.