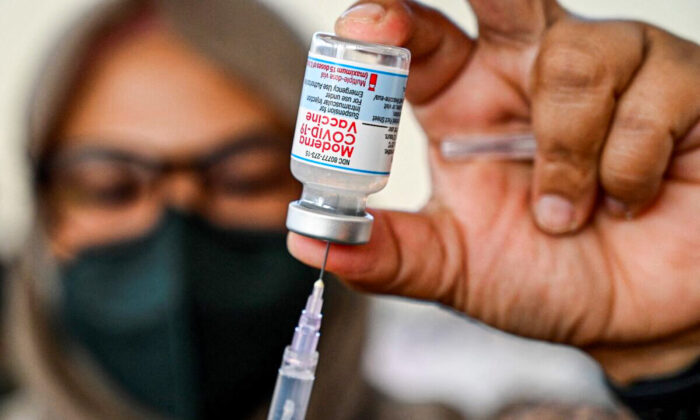 A health worker prepares a dose of the Moderna COVID-19 vaccine at a convention hall in Banda Aceh on Aug. 30, 2021. (Chaideer Mahyuddin/AFP via Getty Images)
Asia & Pacific

Some 9 million doses of expired COVID-19 vaccines being kept in storage facilities in Indonesia will be destroyed, as the country winds back its anti-COVID measures.

“Our storage facilities are feeling the strain as they’re filled with expired doses,” Health Minister Budi Gunadi Sadikin said in a Tuesday briefing Bloomberg reported. “That’s especially as we have a new campaign to push for basic vaccination for children across the country.”

The majority of the vaccines were donated from developed countries before their expiration dates, Sadikin said, according to local media KOMPASS.com.

“When the vaccines were transferred to us, the average expiration date was between one and three months,” he said, adding that Indonesia accepted the free vaccines due to the outbreak situation at the time.

Sadikin cited the decline in the country’s vaccination rate as another cause for the vaccines being unused. The government’s initial goal was for 90 percent of the population to be fully immunized, and 80 percent to receive a booster dose.

“We discussed with [Prime Minister Joko Widodo] whether the vaccination rate was attainable,” he noted. “It would be more realistic to have 70 percent of the population fully vaccinated and 50 percent receive a booster shot.”

The Indonesian government lifted the outdoor mask mandate and waived pre-departure coronavirus testing for foreign travelers on May 18. Mask wearing will remain mandatory for indoor activities and on public transport, reported Reuters.

Indonesia is not the only country that saw donated vaccines go to waste. In December last year, Nigeria destroyed over a million expired COVID-19 doses and announced that it would no longer accept donated vaccines with short shelf lives.

The United Nations revealed in January that more than 100 million donated COVID-19 vaccine doses were rejected by poor countries, primarily due to their short shelf life, reported Reuters.

About 15.5 million of the rejected vaccines were destroyed, the U.N. stated, adding that the recipient nations had to delay supplies due to a lack of storage facilities for the vaccines.

In November last year, the African Vaccine Acquisition Trust (AVAT) and the U.N.-backed COVAX program issued a joint statement saying that the quality of donations “needs to improve.”

“The majority of the donations to-date have been ad hoc, provided with little notice and short shelf lives. This has made it extremely challenging for countries to plan vaccination campaigns and increase absorptive capacity,” they stated.

“To achieve higher coverage rates across the continent [of Africa], and for donations to be a sustainable source of supply that can complement supply from AVAT and COVAX purchase agreements, this trend must change.”

They urged donors to release donated doses in large volumes and have a minimum of 10 weeks shelf life when they arrive in-country, as well as to inform recipient countries of the availability of the doses not less than four weeks before their arrival.