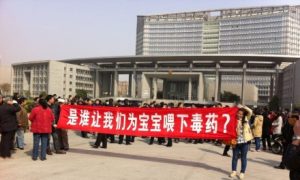 The widespread practice of unethical production methods by food companies combined with China’s low regulation policies has led to health complications for hundreds of thousands of individuals.

In just six years, these nine major scandals from China’s food industry have made international news headlines, and it seems as if every week a new food scandal in China arises or an old one resurfaces. Consumers have become wary of food safety and have tried to find reliable food distributors and restaurants. However, this tends to come at a premium cost.

The unethical companies responsible for the negative effects from tainted food consumption often do not compensate those that fall victim to illegal food practices. Those responsible are at times difficult to pinpoint, because in many cases there are multiple groups or individuals involved.

Victims include the babies that drink contaminated milk powder, the villagers that eat crops that were watered with toxic chemicals, and even consumers in other countries who unwittingly eat tainted food products imported from China. On top of that, families and friends of victims were heart broken, as they didn’t know where to turn since doctors were refusing to help them.