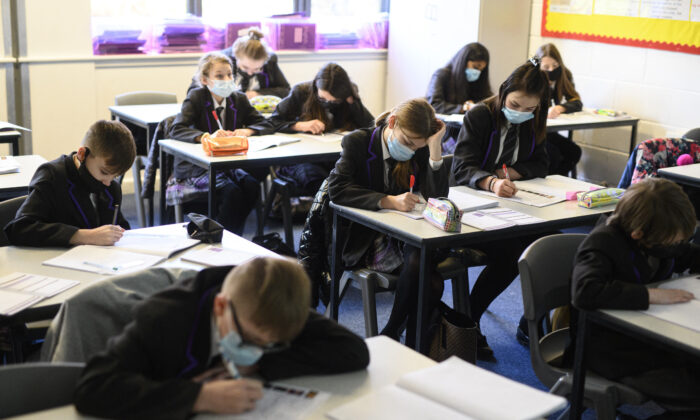 9 in 10 Young Teens in UK Likely to Have CCP Virus Antibodies: ONS Analysis

At the beginning of January, around 9 in 10 young teenagers in the UK had either previously had COVID-19 or been vaccinated against the CCP virus, official analysis suggests.

The Office for National Statistics (ONS) estimated that the percentages of children aged between 12 and 15 who were likely to test positive for CCP (Chinese Communist Party) virus antibodies were 90.9 percent in England, 91.7 percent in Scotland, 88.0 percent in Wales, and 90.7 percent in Northern Ireland.

In comparison, the percentages of adults likely to test positive for CCP virus antibodies were estimated to be 98 percent in England, 98.2 percent in Scotland, 97.4 percent in Wales, and 98.4 percent in Northern Ireland.

Among children aged between 8 and 11, the estimated percentages were 58.8 percent in England, 53.3 percent in Scotland, 97.4 percent in Wales, and 37.9 percent in Northern Ireland.

The estimates are calculated based on a sample of blood test results for the week beginning Jan. 3, and it’s the first time the bi-monthly study has published antibody estimates of children.

The very high level of antibodies among young teenagers reflects both the prevalence of COVID-19 in this age group in recent months and also the impact of the vaccination programme.

First doses of the COVID-19 vaccine have been available for 12- to 15-year-olds since September 2021, with jabs being offered in schools as well as local vaccination centres.

Second doses are now being rolled out to this age group.

The ONS said there is a “clear pattern” between vaccination and testing positive for COVID-19 antibodies but “the detection of antibodies alone is not a precise measure of the immunity protection given by vaccination.”

ONS also said its standard antibody threshold is 42 nanograms per millilitre, meaning a negative antibody test could mean the detected antibody levels are too low and it does not necessarily mean a person has no antibodies or immune protection.

Only a very small number of children under 12 are likely to have received any COVID-19 vaccine, with the Joint Committee on Vaccination and Immunisation (JCVI) recommending just last month that 5- to 11-year-olds in clinically vulnerable groups should now be offered two doses, delivered eight weeks apart.

The JCVI has so far only recommended universal CCP virus vaccination to people aged 16 and over on health grounds. The committee also recommended the Pfizer-BioNTech vaccine to younger children who are clinically vulnerable or live with immunocompromised people.

The universal vaccination for 12- to 15-year-olds was recommended by the UK’s chief medical officers after taking wider considerations into account, “most important[ly]” the “impact on education,” they said at the time.

All ONS estimates are for people in private households and are subject to uncertainty, given they are based on samples that are part of the wider population.