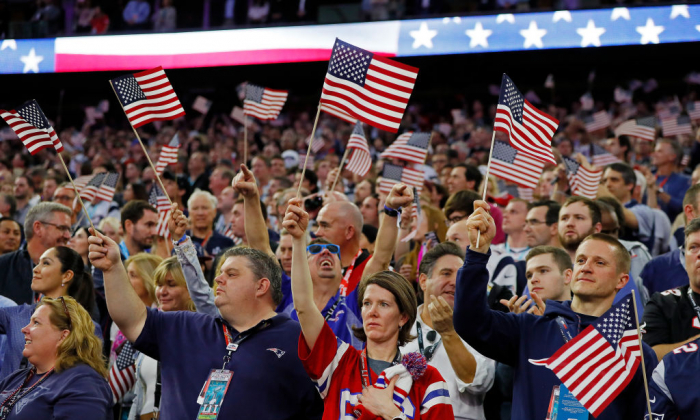 Fans wave American Flags during the National Anthem prior to Super Bowl 51 between the Atlanta Falcons and the New England Patriots at NRG Stadium in Houston, Texas, on Feb. 5, 2017. (Kevin C. Cox/Getty Images)
Politics

9 in 10 US Adults Proud to Be American: Poll

Almost 90 percent of adults in the United States are proud to be American, according to a Gallup poll released on July 2.

Eighty-eight percent of respondents told the pollster that they are either “extremely proud,” “very proud,” or “moderately proud” to be American.

Gallup surveyed 1,526 adults in all 50 states from June 1 to 13. Each respondent was asked how proud he or she was to be an American: extremely proud, very proud, only a little proud, or not at all proud.

Democrats and independents are driving an overall decline in the patriotism statistic. While the number of Republicans who said they were either extremely or very proud to be Americans has remained above 90 percent nearly every year since Gallup began tracking the statistic in 2001, the number of Democrats and independents who feel the same way has always been lower and dropped to the lowest level on record by April this year.

The Democrats’ antipathy toward President Donald Trump is a likely factor for the decline in the group’s patriotism, Gallup notes. The president has been the target of relentlessly negative coverage, despite a strong economy, roaring jobs market, and historic progress made toward denuclearizing North Korea.