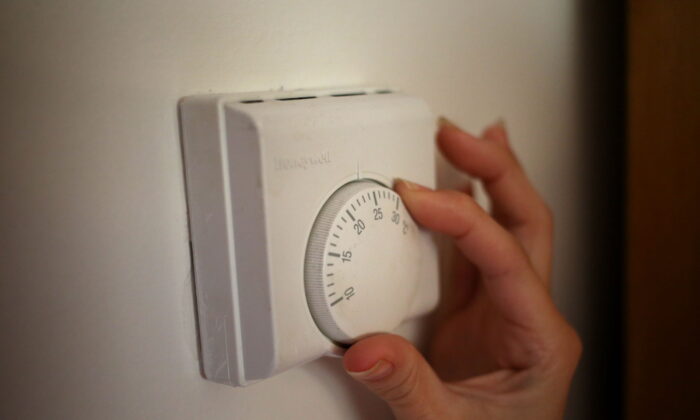 Undated file photo of a person adjusting the dial of a thermostat. (Steve Parsons/PA Media)
UK

9 in 10 Britons Affected by Cost of Living Increase: ONS

The increase in the cost of living affected around 9 in 10 adults in Britain in July, according to survey data from the Office for National Statistics (ONS) published on Friday.

The ONS said 89 percent of adults surveyed between July 20 and July 31 reported an increased cost of living over the past month, equal to around 46 million people.

The same proportion reported an increase in the previous bi-weekly survey, taken between July 6 and July 17. It compares to 62 percent (32 million adults) who said they were affected in November 2021.

Almost all of those who saw an increase in the cost of living (94 percent) said their food shopping become more expensive, 82 percent reported a higher electricity bill, while 77 percent said they had to pay more for fuel.

Overall, three in four of the respondents said they were very or somewhat worried about the costs in the last two weeks.

Around 5,000 adults are invited to respond to each survey.

Among those who experienced an increased cost of living between March 30 and June 19, 57 percent said they were spending less on non-essentials, just over half (51 percent) said they had cut back on gas and electricity usage at home, and 42 percent reported reducing non-essential journeys in their vehicle.

More than a third (36 percent) said they were shopping around more, while 35 percent said they had spent less on food shopping and essentials.

Almost a quarter (23 percent) of the respondents said they had dipped in their savings to cover the increased cost, and 13 percent said they were using more credit than usual.

The rising cost has also affected different groups of people disproportionately, with disabled people and those in the most deprived areas more likely to cut back on spending on food and essentials.

In June, soaring food and fuel prices pushed the UK’s inflation rate up to a 40-year high, at 9.4 percent.

The Bank of England forecasted on Thursday that inflation will keep rising, peaking at more than 13 percent at the end of this year.

It also projected the economy will start shrinking and will keep getting smaller until 2024, making it the longest recession since the 2018 economic crisis.

The bank raised the key interest rate to 1.75 percent, the highest in 27 years, in a bid to reign in runaway inflation, eventually bringing it down to the 2 percent target.