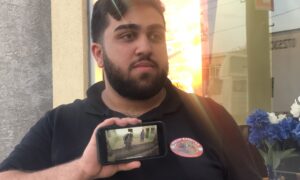 'They're Looking for Them Door to Door': Afghans in New York React to Taliban Takeover of Afghanistan
0
Share Now
TelegramFacebookTweetEmailTellMeWeReddit
Copy Link 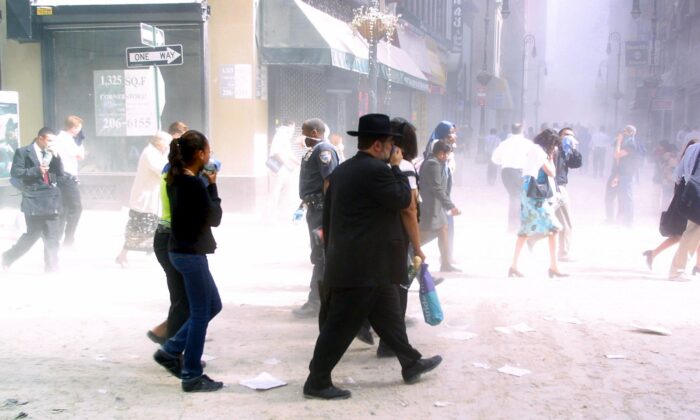 Pedestrians make their way through the dust of lower Manhattan in New York on Sept. 11, 2001, after two hijacked planes were flown into the World Trade Center. (Doug Kanter/AFP via Getty Images)
NY News

Toxins from the rubble of the former World Trade Center continue their poisonous streak even 20 years on, leading to serious ailments and death. It’s not just the first responders who took part in rescue efforts after the terrorist attacks of Sept. 11, 2001; also affected were the tens of thousands of civilians who volunteered to help with the cleanup or returned to work in the downtown area shortly after.

Everyone from security guards to office workers returned to do their jobs following an assurance from the government that the clouded air was safe to breathe. People questioned the assurance, as the air quality was palpably bad. How bad it truly was, though, they realized only after people started getting sick. The government came to recognize dozens of ailments linked to the toxic exposure, including respiratory issues and more than 60 types of cancer.

In 2010, Congress passed a law providing health care coverage and financial compensation to anybody diagnosed with one of the recognized ailments who can prove presence in the lower Manhattan affected area on 9/11 or sometime in the following months. The bill was expanded and reauthorized several times, most recently in 2019.

Chris Sorrentino is one of those covered by the bill. He worked as a specialist on the floor of the New York Stock Exchange several blocks from Ground Zero.

On the morning of Sept. 11, 2001, he was on a bus from Brooklyn, stuck in an exit from the Brooklyn-Battery Tunnel due to a traffic jam. Unbeknownst to him, the gridlock was caused by the first plane hitting the World Trade Center. Eventually, the driver let the passengers off the bus, and Sorrentino started walking toward Wall Street.

“I heard a plane just screaming. I looked up and I saw a huge jetliner, a passenger jetliner,” he told The Epoch Times.

It was way too low, he thought.

“This isn’t going to be good.”

As the plane disappeared from view, he heard an explosion and saw a massive cloud of smoke and flame engulfing all the buildings in the area. The second tower had been struck.

He started to walk toward the area, still unsure what was going on. He met a few colleagues who also worked on the floor. They told him this was the second plane to hit.

They decided to still go to the exchange, but received a call on the way to head uptown instead.

They headed for FDR Drive, which was open for people to walk north. On the way, he saw a person, possibly a government worker, with a satellite phone. Cell reception was down at this point, so he asked if he could call his wife.

“Make it quick,” the man said.

His wife was watching what was happening on the news. He told her to get his boat, parked south of the Verrazzano-Narrows Bridge in Brooklyn, and come to the South Street Seaport on the west side of lower Manhattan.

She had never taken the boat out by herself before, but she agreed to do it.

As Sorrentino and his colleagues walked toward the seaport, the towers collapsed.

“All you saw was a dust cloud just rummaging through every street and alleyway,” he said.

Although they were already close to the western edge of Manhattan, across the width of the island from the towers, they were still covered head-to-toe with soot.

“You couldn’t see 50 feet in front of you,” Sorrentino said. “That’s how thick it was.”

People immediately wrapped clothing around their faces, as the cloud was “choking” to breathe in, he said.

About two hours after the phone call, his wife arrived. There was already a crowd of people on the pier trying to jump on any boat that pulled up.

“Just make a quick sweep, don’t even stop,” he yelled at his wife.

He jumped on the boat and made another pass, picking up about 10 people.

“We left the island,” he said.

On their way to Brooklyn, they were stopped by the Coast Guard inquiring about who they were, since the entire area was supposed to be sealed off.

“My wife, I guess, snuck in under the radar before they shut it down,” he said.

Sorrentino and thousands of his colleagues returned to work the following Tuesday. There was pressure at the time to reopen the stock exchange to restart trading, but also to show defiance in face of the attacks.

Christine Todd Whitman, then-head of the Environmental Protection Agency and a former governor of New Jersey, announced that the air quality was acceptable for people to return to the area.

“Governor Whitman assured everybody that the air quality was fine and there was nothing wrong,” Sorrentino said. “Which was a 100 percent lie.”

It was no mystery to anybody who came downtown that the air quality “was not acceptable,” he said.

The dust was ever-present, impossible to completely clean out. Sanitation workers were hosing down the streets every day, but it wasn’t enough.

“It looked almost like snow every morning,” he said.

In addition, the fire underneath Ground Zero kept burning for about three months.

“There were still plumes of smoke coming out every day,” Sorrentino said. “It was the most rancid smell you would ever want to smell in your life.”

Many of those who experienced it, including Sorrentino, described it as the “smell of death.”

It reeked like asbestos and rotten flesh and filled lower Manhattan for “a good three weeks to a month,” he said.

Building workers had to constantly replace air filters in their ventilations systems as they were quickly getting clogged, he heard from other workers.

The smell was so irritating it made some people’s eyes water, he said.

Yet many, it appears, didn’t grasp the full weight of the consequences of breathing it in.

“I definitely didn’t think long-term on it,” Sorrentino said.

Looking back, he wasn’t even sure if regular workers there knew what an N95 mask was. Many were wearing simple cloth masks, such as those handed out by the National Guard, he said.

“I would say I know well over a hundred people that passed away or got cancer from 9/11,” he said.

Through the years, anytime he heard about somebody getting sick, he said, “We must be the lucky ones.”

Then, in 2018, he started to feel pain in his abdomen. He went to doctor after doctor, but nobody could figure out what was wrong. It got to the point where the doctors considered sending him to a psychiatrist, thinking the pain was psychological.

He finally had an upward cystoscopy done in 2019, which revealed an aggressive bladder cancer. He agreed to undergo a biopsy on the spot with no anesthesia, “the most painful thing” in his life, he said. He went on to undergo advanced bladder surgery and began a grueling recovery.

He was told that if he was diagnosed a few months later, there would have been nothing doctors could have done for him.

Sorrentino was able to register for the 9/11 compensation fund, as his type of cancer is one of the ailments presumed to be linked to the toxins.

While it’s not necessary, many people file claims with the compensation fund through a law firm—in Sorrentino’s case, Barasch and McGarry.

The firm, which represents more than 25,000 clients with claims against the fund, used to be a small practice handling work injury claims, mostly by firefighters. However, with offices less than three blocks from Ground Zero, the firm was fundamentally changed by the attacks, according to Michael Barasch, managing partner at the firm.

On the day of the attacks, Barasch was at a gym on Vesey Street, about a block from the towers, when he heard an “enormous explosion,” he told The Epoch Times.

Somebody said a plane hit the World Trade Center.

“We went out to the corner of Broadway and Vesey Street and we’re just watching in horror as people were leaping out of the building,” he said.

As the fire ate its way through the tower, the second plane hit.

He ran back to his office.

“Get out of here. We’re at war,” he told everyone.

He stayed behind with a partner whose wife worked at one of the towers. The man wasn’t sure if his wife had made it to work that morning and was trying to get in touch with her.

“Finally, the doorbell rang and it was his wife,” Barasch said.

They all stood there in astonishment watching the grisly scene when the first tower started to collapse.

“We better get out of here,” they realized.

They ran down 18 flights of stairs.

“By the time we got to our lobby, it was already filling up with dust from the first implosion,” he said.

Barasch and his coworkers returned to their offices a month later, after power was restored.

The outage saved them from exposure to the worst of the contamination, but the place still “absolutely reeked” when they got back, Barasch said.

“Even if the windows were shut, it would come through the air conditioning system,” he said.

The smell was so irritating it would prompt nosebleeds in some people, he said.

About half his office ended up with health problems, from respiratory issues to various forms of cancer. Some died. Barasch himself went through prostate cancer.

His firm got involved in the first wave of victim compensation, representing about 1,000 clients. The initial program was designed to shield airlines from liability for the attacks. Claims against the fund were conditioned on waiving one’s right to sue the airlines.

The first wave ended in 2004 after paying out $7 billion.

After a protracted back-and-forth over the scope and funding, Congress reopened the compensation fund and health program through the 2010 James Zadroga 9/11 Health and Compensation Act. It was named after one of Barasch’s clients, NYPD detective James Zadroga, who participated in the 9/11 rescue and recovery efforts and died of pulmonary fibrosis in 2006.

The 2019 reauthorization extended the program to 2090. At the time, the Victim Compensation Fund had already paid out some $5 billion under the Zadroga Act and was projected to spend another $10 billion by 2029 (pdf). The health program paid out about $1.5 billion by 2019, based on an earlier estimate by the Congressional Budget Office (pdf).

The law limits lawyer fees to 10 percent of the compensation award.