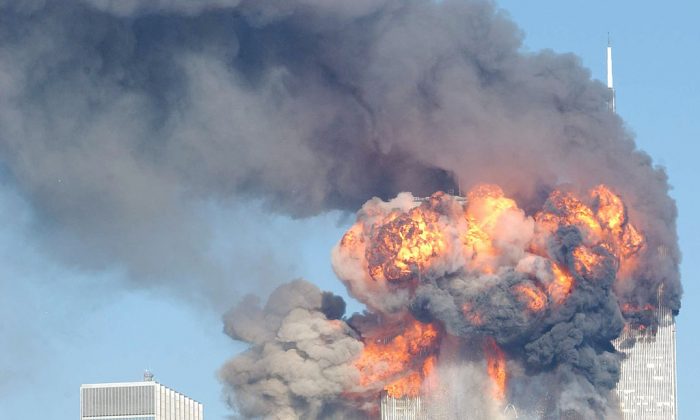 Every Sept. 11, America is forced to look back at the ghastly experience of that day and remember the trauma we suffered.

Recalling it is painful but also necessary. We were united as one, even if only briefly. What brought us together to bear the weight of that still important historical moment?

As the fire blazed and plumes of smoke billowed over America’s most famous skyline, we were forced to reflect inward on our national identity–who we are as a people, where we come from, and where we are going.

Moments of tragedy have this effect. The particular concerns of the day-to-day hustle and bustle of life are put into perspective. On that morning in 2001, all of our apparent grievances—whether they happened to be political, social, or economic—melted into the background as we considered what it actually meant to be an American—and what responsibilities subsequently accompanied that honor.

As we watched the smoldering buildings crumble to the ground in clouds of debris, we realized that the thing that set us apart from the rest of the world was this one simple fact: America, for all of its supposed faults, was free. Not in the 2022 sense that we must be guaranteed the ability to have an abortion or to marry someone of the same sex, but free from government coercion and tyrannical oppression without recourse.

At that moment, we were connected back to the founding of this country. Regardless of what today’s historical revisionists tell you, that founding was guided by the central premise that all men are created equal and that they, therefore, must have the freedom to form a government to which they consent. Rights are not gifted by human authority. They are bestowed by a Creator and are thus essential to our very nature. That means that we have the duty to fight against their infringement.

On 9/11, we remembered that our nation, its true culture seen in the homes and hearths of its middle-class citizens, flowed from this single fact. This country was founded on the belief that no human, man or woman, can deprive us of what is rightfully ours by implication of our very nature, proceeding from God—not the government.

We were reminded that our freedom of conscience, to think and speak and share what we believe, regardless of who may disagree with it or take offense by it, set us apart from the rest of the world. In no other developed country is that freedom the legal bedrock upon which everything else is built.

Our government can’t target us because it dislikes our political beliefs. It can’t tell us who we should listen to, what we should watch, or the things we can choose to support.

It can’t use its resources to attack its political opponents. It can’t enforce a radical ideological homogeneity through law. It can’t tell us what values our children must learn to embrace—or else face the repercussions of the state. And overriding it all, it can’t remove our means to resist all of the above and ensure our self-preservation in the last resort.

These were the things that made America America. No more.

All of this has been turned on its head. Our government is actively engaged in all of the above as its ideological agenda was explicitly rejected by the American people.

9/11 was coopted to justify its expansionist foreign policy in the Middle East, as well as an increased size and scope of the national security apparatus. Now, it deems its citizens—through the political leaders they support and the closed society values of religion and tradition they embrace—as the greatest threat to its global agenda.

“Freedom only comes from us,” they tell us. “We, the government, give you your freedom.”

This is a lie, and fighting against that lie is what led farmers and tradesmen to pick up arms in 1775. Just like the attacks on 9/11 were meant to signal to Americans that they would no longer be free to live in this country without fear from violence and oppression, so now we are told that there will be no freedom for those who don’t accept the tyranny from Washington.

We make sure your elections are secure. Question that and lose your right to vote.

We make sure you are healthy from disease. Question that and lose your right to work or participate in society.

We make sure you have the correct, tolerant opinions. Question that and lose your right to free speech.

This is borne out in the fact that leftist media has decided to unanimously go all in on equating Jan. 6 to 9/11.

Jan. 6, the event in which the only person to die was an unarmed protester shot in the neck by law enforcement, versus a terrorist attack that claimed the lives of nearly 3,000.

Because 9/11 and Jan. 6 are actually very similar. Not in any regard to how the two events actually played out, but how they are utilized by the corrupt and soulless Washington power center.

Like 9/11, the actual events of Jan. 6 have been separated from the media narrative that followed. The subsequent crackdown on political opposition has been justified by the supposed threat of domestic insurgency that was represented at the Capitol.

This is an absolutely ridiculous notion, and anyone who argues it is not in good faith. It is simply being used as a pretext to eliminate political enemies and facilitate an ideological agenda. The ones pushing these lies do not cherish the country’s founding.

Sept. 11, 2001, was a day that reminded us of what it really meant to be Americans and what our duties to defend this country entailed. We again fell in love with America—not its politicians or celebrities, but its people and ideals.

In those billowing plumes of smoke, it became explicitly clear exactly what set us apart from everyone else, and in that setting apart subsequently united us as one. We were, are, and must continue to be a free people.

This fact can’t be buried, not even by the avalanche of ash that carpeted the streets of Manhattan.

Nor can it be censored—not even by the pervasive corruption of the colluding forces in Washington, Big Tech, and media that seek to silence all dissenting opinions.

We must remember what united us on that harrowing morning in September. Love of freedom and the call to defend it from all threats, foreign and domestic.

We must remember it, no matter how forcefully the political forces in this country try to make us forget.