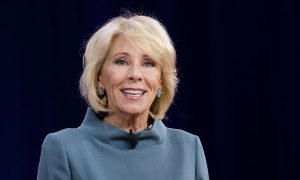 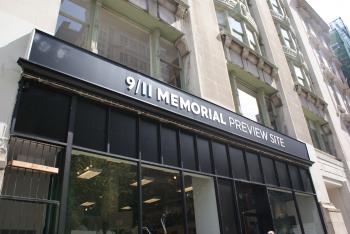 Outside the 9/11 Memorial Preview Site on Vesey Street in Lower Manhattan, where a new campaign to make Sept. 11 an annual day of service is underway. (Diana Hubert/The Epoch Times)
US

This Year, 9/11 Shifts Toward Service

By Diana Hubert
Print
NEW YORK—Eight years after 9/11, various 9/11 groups are making a conscious effort to shift away from mourning and toward a focus on service. At the new 9/11 Memorial Preview Site on Thursday, several organizations dedicated to remembering the terrorist attacks and helping family members of victims discussed the many planned initiatives to not only mourn the tragedy but celebrate the acts of kind-hearted Americans which have emerged from the attacks.

This year will be the first time the day will become a federally-recognized National Day of Service and Remembrance after President Obama signed legislation for that purpose in April.

“We hope to rekindle the spirit of unity and compassion that followed the terrorist attacks, and are truly inspired by the remarkable support for this observance and the help of so many wonderful leaders and organizations that share this hopeful vision,” said David Paine, the president of MyGoodDeed, a nonprofit organization that set out to make 9/11 a National Day of Service, in a release.

MyGoodDeed is also planning to mark the tenth anniversary of 9/11 in 2011 by organizing what they say will be the largest single day of service and volunteerism in the nation’s history.

MyGoodDeed also unveiled a new Web site, http://911daysofservice.org as a forum for groups and individuals to post their planned activities as well as good deeds commemorating 9/11.

“9/11 has caused millions of people to do something … anything. We have been getting 10,000 visitors to the Web site a day and it hasn’t even been announced yet,” said Paine.

Mary Fetchet, who lost her 24-year-old son in the attack, said that although it was a tragic loss, good came out of it.

“People not only reached out their hands but opened their hearts and helped us heal,” said Fetchet.

She is hoping the 9/11 commemoration will spark that feeling in people again.

“I think it’s going to be a movement for the United States,” she said.

A tribute evening at the Beacon Theatre will be held on 9/11 at a 5:30 p.m. in memory of those who lost their lives and who in response to the attacks, rose to service. Prominent actors and supporters like Gary Sinise and Jimmy Fallon, as well as singer/songwriter Gavin DeGraw and the Harlem Boys and Girls Choir will be among the entertainers and speakers in attendance as well as Mayor Michael Bloomberg and Governor David Patterson.

Although the tickets are mostly reserved for 9/11 community members and volunteers of 9/11 service organizations, the public will have a chance to win tickets through a lottery by entering at http://911dayofservice.org/tirbute.

“The anniversary of 9/11 is always a very personal day of sadness and reflection for me and my family, but it can also be a day when the nation comes together to embrace once more the spirit of compassion that helped our family and the entire 9/11 community see us through the very dark days following the attacks,” said Jay S. Winuk, cofounder of MyGoodDeed who lost a brother in the attack in a news release.

The fashion community is also getting involved. As part of Mercedes-Benz fashion week, prominent designers like Donna Karen will be donating some of their spring collection for an online auction to raise money for 9/11 charities.

“We are inspired and humbled by the incredible support of so many designers who have agreed to donate one-of-a-kind pieces to support the online auction,” said Paine in a news release.