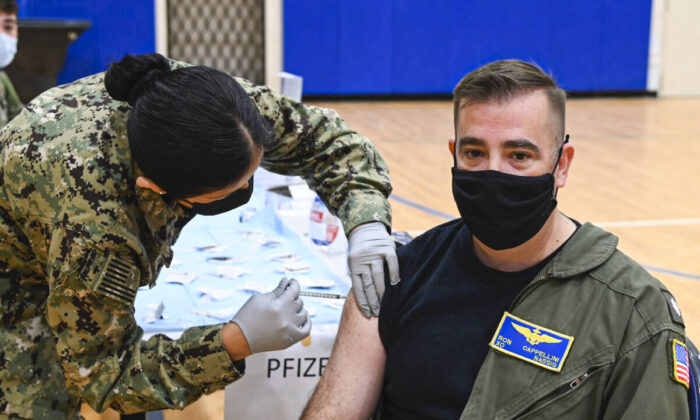 The number of Navy personnel discharged for refusing to get vaccinated has risen to 884, the military branch said on May 5.

A total of 22 Entry Level Separations have taken place. Those separations are given to individuals who, since the vaccine mandate began, have separated from the Navy prior to having completed 180 days of active military service.

Defense Secretary Lloyd Austin, a Biden nominee, initially imposed the COVID-19 vaccine mandate in August 2021, stating that being vaccinated would “enable our service members to stay healthy, to better protect their families, and to ensure that our force is ready to operate anywhere in the world.”

Austin also said the vaccination requirements were “necessary to protect the force and defend the American people.”

The Navy began discharging sailors in January of this year and has so far not eased up on the mandate, despite the shots being less effective in protecting against the highly-transmissible Omicron variant.

A number of soldiers had submitted exemption requests from the mandate on religious or medical grounds.

The Navy said that a total of 10 religious accommodation requests for members of the Individual Ready Reserve (IRR) have been conditionally approved, meaning that the individual will not be required to get vaccinated while in the IRR but must be fully vaccinated before returning to service.

Overall, the Navy has the second-highest number of personnel being discharged for refusing to get the shot, behind the Marine Corps, which has now separated 2,117 Marines, according to the United States Naval Institute.

Meanwhile, the Army has the third-highest separations at 505, and the Air Force has 351.

As of May 5, 3,951 active component and 3,291 Ready Reserve service members remain unvaccinated.