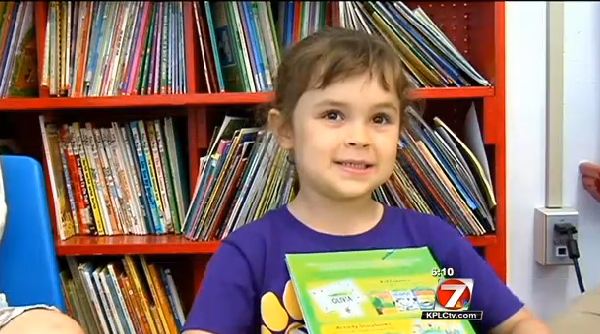 Sophia Moss, a 5 year-old kindergartner in Louisiana, read 875 books in one school year. (Screenshot/KPLC-TV)
US

“A lot of the days I read books. It’s just a couple days I don’t read,” Sophia, a student at T.S. Cooley Elementary Magnet School in Lake Charles, told local broadcaster KPLC-TV. “I just like reading!”

The school’s librarian said they would have to order more books because Sophia has read so many of them.

“This is very unusual for a kindergartner, especially to read this many books in a year’s time. Very unusual,” said Mary Lanier, the librarian.

Sophia’s father Carl said that he helps his daughter check out books from the library; it started at five a week and ended at more than 20.

“She’d be reading instead of sleeping,” Carl said. “She loves to read and she does it all the time.”