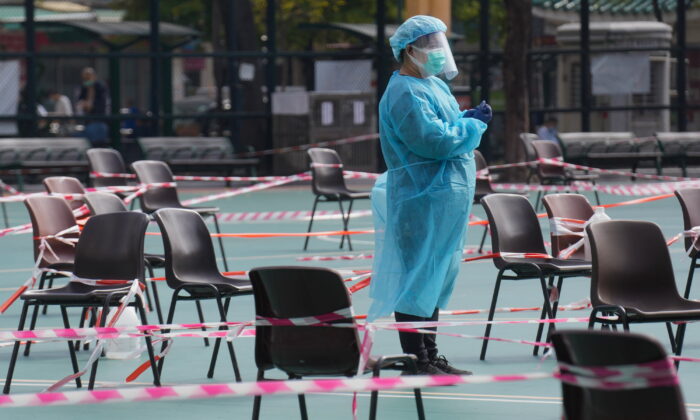 A health worker waits for residents to be tested for the Coronavirus at a testing center in Hong Kong on Feb. 28, 2022. (Vincent Yu/AP Photo)
Vaccines & Safety

87 Percent of Immunized Who Died of COVID-19 in Hong Kong Got Chinese-Made Vaccine: Report

About 87 percent of vaccinated Hong Kong people who died from the latest wave of COVID-19 outbreak had taken China-made vaccines, local media reported, citing official data. But most deaths occurred among those who were not vaccinated.

Ming Pao, a local newspaper, said it conducted an analysis of data from the Hospital Authority of 5,167 out of overall 5,400 local death cases in the latest Omicron-driven outbreak. It found that 71 percent of those who died were unvaccinated.

Among the 1,486 vaccinated people who died from COVID-19, almost 1,300 of them—87 percent—had received at least one dose of the CoronaVac vaccine developed by China’s Sinovac firm, a March 20 report showed.

In comparison, only 12 percent died after getting BioNTech’s Comirnaty vaccine, according to the paper.

The Hong Kong government, without naming the media, said later that day that such a report was “misleading.” It said that about 88 percent of the 5,435 fatalities did not receive two doses of COVID-19 vaccines. It provided further data on the city’s current virus figures, but this did not include information about what vaccines those who died who were fully vaccinated took.

The financial hub is currently in the grips of its worse outbreak and has registered the most deaths per capita globally in recent weeks.

Two vaccines are available in the city: The Chinese-made Sinovac, which uses inactivated technology, and the BioNTech Comirnaty vaccine, based on mRNA technology.

On March 20, health authorities in Hong Kong reported 246 deaths. Daily cases have been hovering around 10,000-30,000 in the past week, although some experts say the real figure is significantly higher as many people test positive at home and do not report their results to the government.

There have so far been more than 1 million confirmed cases, and more than 5,000 deaths. But about half of the city’s 7.4 million residents have likely been infected, a study from the University of Hong Kong estimated this week.

More than 85 percent of the city’s deaths have occurred among the elderly population aged 70 and over, most of whom were unvaccinated.

Less than 40 percent of those aged 80 and over are vaccinated, government figures show.

Of those aged 80 and over who were vaccinated, 80 percent received Sinovac vaccines and the rest received BioNtech vaccines, the Hong Kong government said.

Studies have shown that the Sinovac vaccine is less effective than the BioNtech vaccine and offers limited protection against Omicron.

At least seven Hong Kong residents are in serious condition and died after receiving vaccines earlier this month, local authorities announced, but said that in five of those cases the deaths were not caused by the vaccine. In one of those cases, a 55-year-old woman with chronic illness died four days after receiving the Sinovac vaccine, local media reported.

Mainland China, which has similar COVID-19 policies, is also battling its purported worst outbreak since the virus first emerged in Wuhan city in 2020, leading to massive lockdowns across the country.