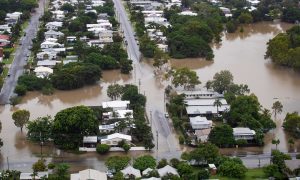 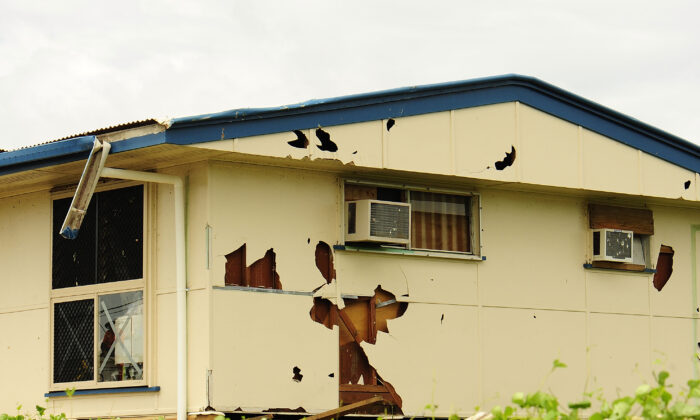 TOWNSVILLE, AUSTRALIA - MARCH 21: A storm damaged house is seen in the Townsvile suburb of Gulliver on March 21, 2012 in Townsville, Australia.(Photo by Leigh Turner/Getty Images)
Australia

Northern Australians are dropping insurance as sky-high premiums cripple community life, according to a report by the Australian Competition & Consumer Commission (ACCC).

The final report from the ACCC’s three-year Northern Australia Insurance Inquiry shows that 20 percent of homes (around 86,000 properties) in northern Australia are uninsured, almost double the rate in other parts of the country.

The non-insurance rate is highest in north-Western Australia, followed by the Northern Territory and northern Queensland.

Within five years from 2011 to 2016, an extra 30,000 properties in north Queensland have abstained from building insurance, while around 4,000 in north-Western Australia have done the same.

Unaffordable insurance costs are forcing people to avoid insuring their homes the report pointed out.

“We have heard first-hand how many residents of northern Australia are struggling to find suitable and affordable insurance in this market, and the considerable impact this is having on them and their communities,” ACCC Deputy Chair Delia Rickard said.

The inquiry found home and contents insurance costs in northern Australia came in at $2,500, twice as much as the rest of the country.

Meanwhile, average premiums have sky-rocketed over the past 10 years. Home insurance costs soared by 178 percent in northern Australia between 2007-2008 and 2018-2019, more than three times higher than the rest of the nation.

The price hikes are leaving more households financially vulnerable to natural disasters, including cyclones and floods, which are driving much the cost of premiums upwards, ACCC noted.

“We know that there are real reasons for more expensive insurance premiums in northern Australia,” Rickard said, “The risk of extreme weather is higher, and it can be costly for insurers to service these regions.”

“However, different insurers can quote vastly different premiums for the same property. While many consumers could save by switching, it is harder than it should be for consumers to shop around.”

According to the report, premiums can be over $4,700 for the top 10 percent of policies in areas with high cyclone risk levels, and can reach up to $1,240 for flood areas depending on the insurer.

According to the report, 33 percent of residents surveyed chose not to claim their insurance mainly because “the excess was too high”.

The estimated number of homeowners without insurance in Townsville has also risen sharply from 9 percent in 2011 to 20 percent in 2016.

The ACCC made 38 recommendations to improve the northern Australian insurance market, including using direct subsidies to relieve consumers’ financial pressures rather than government reinsurance pools.

The watchdog also suggested abolishing stamp duty, saying they are “an inefficient form of taxation.”

In 2018-2019, northern Australians paid nearly $80 million in stamp duty on their insurance, adding between 9 and 10 percent to premiums.

The report advocated for more short-term help for customers struggling to pay their premiums, such as deferring payments, reducing or waiving surcharges for monthly payments, or offering payment plans.

“It is crucial that we help households hold onto their insurance, because becoming uninsured can result in much greater financial hardship in the future if homes or possessions are impacted by a severe event,” Rickard said.

Other suggestions include improving the transparency in disclosing instalment surcharge costs, investing in risk mitigation and building a national website to compare home insurance.

However, some of ACCC’s recommendations have been slammed by the Insurance Council of Australia (ICA) as “flawed ideas” that were “unviable and too expensive”, according to an ICA’s media release.

ICA CEO Rob Whelan said the industry is “disappointed” over ACCC’s emphasis on mutual and direct subsidies, options that “have been tried” and “failed” in other countries.

“Insurance in Northern Australia should not be subsidised by the rest of the nation; this would be unfair and unsustainable,” he said.

Whelan also opposed a national price comparison website for home insurance, saying it will not provide useful information as the level of risks varied in different parts of the country.

He said a comparison website, run by the Australian Securities and Investments Commission (ASIC), already does the job for northern Australia.

Although Whelan supported ACCC’s consultation to abolish stamp duty and invest in mitigation, he noted that “little progress has been made” by the government.

“The insurance industry would have preferred the ACCC offer practical recommendations that address the key drivers of pricing and availability of insurance in northern Australia – the high risk and impact of natural disasters (in particular cyclones and floods), high costs of materials and trades, inadequate building controls, and poor-quality building stock,” he added.