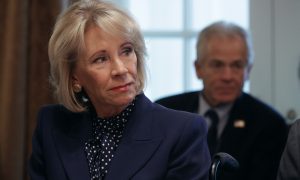 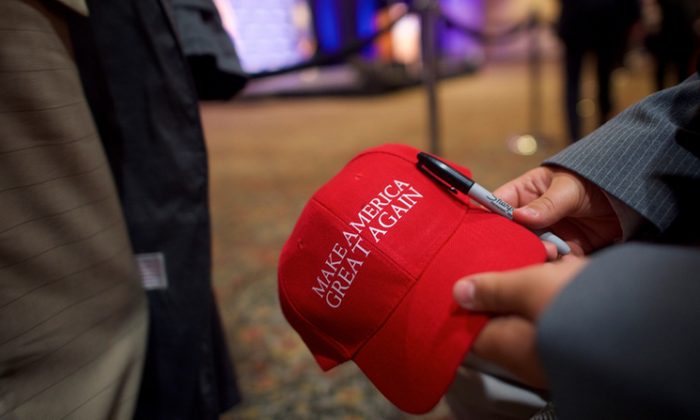 Somerset County Prosecutor Michael Robertson said the elderly President Donald Trump supporter was shopping at a supermarket in Franklin Township at 3:24 p.m. on Feb. 25 when he was assaulted.

“The incident reportedly began after the victim was confronted about the red ‘Make America Great Again’ hat he was wearing. The victim sustained minor injuries and declined medical attention,” the prosecutor’s office said in a press release.

Known as “MAGA” hats, the red caps are worn by supporters of Trump, who has been known to wear one himself at times.

Trump used the phrase as his slogan throughout his presidential campaign and still refers to it after gaining office.

It wasn’t clear if there was video evidence of the assault.

A woman seen on a video assaulting a man wearing a “Make America Great Again” hat is an illegal alien who is now facing deportation.

Rosaine Santos, 41, was arrested and charged with disorderly conduct and assault and battery after assaulting Bryton Turner, 23, at a restaurant in Falmouth, Massachusetts.

Footage recorded by Turner showed Santos clearly knocking the hat off of his head. Witnesses said she also hit him while being escorted out of the restaurant by police officers.

Santos pleaded not guilty and was released pending trial but she was detained on Tuesday by Immigration and Customs Enforcement (ICE) after agents discovered that she’s an illegal alien.

“Deportation officers with ICE’s Fugitive Operations Team arrested Rosie Santos, an unlawfully present citizen of Brazil,” ICE said in a statement sent to Boston 25 News. “Santos is facing local charges for assault and other offenses. She is presently in ICE custody and has been entered into removal proceedings before the federal immigration courts.”

Santos, a native of Brazil, told police officers at the restaurant that she thought Turner shouldn’t be allowed to eat in peace while wearing the “MAGA” hat.

Turner told MassLive after the initial arrest that it was sad to see what happened.

“I think it’s sad that people don’t know how to behave in public. Just because I don’t agree with people doesn’t mean I’m going to be going around assaulting people,” Turner said.

13 News spoke with the alleged victim, Terry Pierce. Hear what he says happened in the story below. https://t.co/Kb231iABRc

A Kentucky man was arrested after allegedly pulling a gun on a couple because they were wearing “Make America Great Again” hats.

According to a police report obtained by WBKO, police officers in Bowling Green were called to a Sam’s Club on Feb. 16 about a person with a gun.

Terry Pierce, the alleged victim, said that the other man, identified as James Phillips, pulled a gun because he and his wife were wearing the hats.

Pierce said he was shopping in the Sam’s Club when his wife noticed Phillips making an expletive gesture at her and her husband. She asked him if he had made the gesture and he said he did because of the hats.

Pierce told the Gateway Pundit that he responded with the same gesture and said, “It goes both ways, buddy.”  That’s when Phillips pulled a .40 caliber out and stuck it in his face and said, “This is a good day for you to die,” Pierce said.

A Sam’s Club manager approached and asked Pierce if Phillips had just pulled a gun and when Pierce said yes, the manager called the police.

Pierce then went outside to look for Phillips.

“I went out the front of the store to confront him again and that’s when I got him in his car. He couldn’t leave because his mother was still in the store. And we were having a verbal altercation outside,” Pierce told WBKO. “He tried telling me I assaulted him and I said, ‘I never touched you.’”

Police officers said video surveillance confirmed that Pierce did not touch Phillips. Witnesses in addition to Pierce said that Phillips pulled a gun on Pierce inside the store. Phillips was arrested for first-degree wanton endangerment and booked into the Warren County Regional Jail.