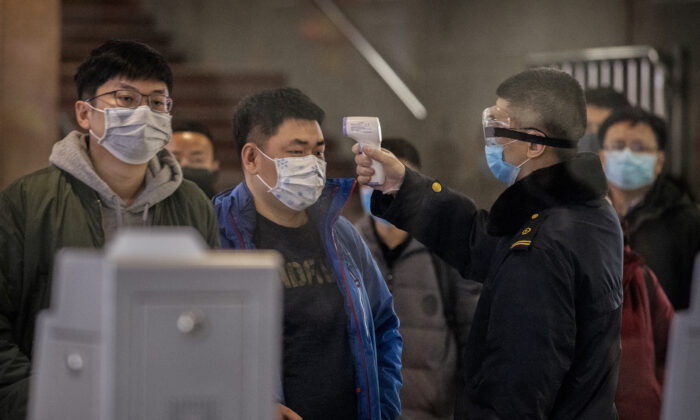 A Chinese passenger who just arrived on the last bullet train from Wuhan to Beijing is checked for a fever by a health worker at a Beijing railway station in Beijing on Jan. 23, 2020. (Kevin Frayer/Getty Images)
Canada

80,000 Ask for China Flight Suspensions Into Canada Because of Coronavirus: Petition

Close to 80,000 people have signed an online petition asking Ottawa to suspend flights from China in light of the COVID-19 outbreak.

Over 50 countries, including the United States, Australia, and the U.K. have imposed some form of restriction on travellers from China, but the federal government has so far ruled out similar restrictions.

“At this point, people from Wuhan have fled the city and are now in cities/provinces around China, even around the world. Some even hid the fact that they were sick and knowingly travelled carrying the virus,” the petition reads.

According to the mayor of Wuhan, the epicentre of the outbreak in China, 5 million people left the city before authorities enacted a quarantine to contain the outbreak.

Canada’s response to the outbreak includes asking international travellers at main airports to reply to screening questions at electronic kiosks, handing out information about the virus at airports, and asking those who show symptoms of the illness to self-report to authorities.
The petition describes the current measures as ineffective. “We urge the Canadian government to suspend all flights from China, to prevent further outbreak of the virus. Please learn from the SARS incident 17 years ago,” it says.
Canada was particularly hard-hit by SARS. The 43 SARS-related deaths in Canada were the fourth highest in the world and were only eclipsed by the death-counts in China, Hong Kong, and Taiwan.

Sheng Xue, a journalist and an author based in the Toronto area, says Canada’s response won’t be effective in stopping the spread of the virus by travellers coming from China, as those who are infected could simply choose not to report to the authorities.

She says she knows of one case where a man with symptoms of the virus travelled from China to Toronto but hasn’t reported to the authorities. The Epoch Times has seen the text conversation between Sheng and the man’s wife talking about the case.

Sheng says the wife told her that her husband travelled to China late last year to visit his mother, but while he was there his mother became very sick, with difficulty breathing, which is characteristic of COVID-19.

The husband came back to Canada in December, and the woman says their entire family became sick for two weeks, coughing constantly and having problems breathing, all symptoms of the coronavirus. They went to their family doctor, but there wasn’t much information on the outbreak back then so no one suspected it was the new virus.

The woman’s mother-in-law passed away in January due to lung failure, and her husband travelled to China for the funeral. By this time, the woman said she was fairly certain they had all contracted the coronavirus but didn’t want to tell authorities in case there would be any problems for her husband travelling back to Canada. Her husband eventually returned to Canada later in January.

Sheng says she thinks Ottawa is avoiding imposing restrictions on travellers from China in order not to displease Beijing. Referring to the arrest of Canadians Michael Kovrig and Michael Spavor in China after the arrest of Huawei executive Meng Wanzhou in Canada, she says China’s “hostage diplomacy” has worked in subduing Canada.

China’s foreign minister has praised Ottawa for not enacting travel restrictions, while blasting the United States for its restrictions.

Sheng notes that Canada’s ambassador to China Dominic Barton also recently praised Beijing’s efforts in containing the outbreak, even though she says the regime’s concealment of the facts was what contributed to the spread of the virus in the first place.

“[Prime Minister Justin] Trudeau has been relatively weak in dealing with the Chinese Communist Party. He hasn’t been able to stand up for the interests of Canada and properly respond to provocations from the Chinese regime,” Sheng says.

She believes Canada should enact similar restrictions as the United States, where travellers who have been in China for the past 14 days—the presumed incubation period of the virus—are barred from entering.

Several members of the Chinese community have told The Epoch Times that they know of many cases where travellers from China whose destination is the United States first come to Canada and wait for 14 days, then move on to their final destination.

Sheng says Canada’s refusal to enact travel restrictions has added to the fear of many in the Chinese community of going to restaurants and other local businesses, causing an adverse impact on the local economy.

“Because of the laissez-faire approach of the Canadian government, many normally busy commercial  places such as [Toronto’s] Pacific Mall are now deserted. The situation is very worrying,” she says.