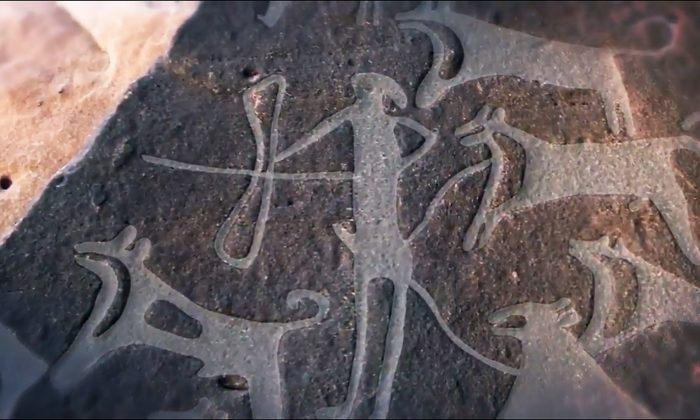 Rock engravings discovered on the Arabian Peninsula might be the oldest images of dogs ever found—and they show dogs on leashes.

The cautiously-estimated 8,000-year-old etchings show a man hunting with a bow and arrow with a pack of dogs surrounding him. Two of the dogs appear to be attached by leashes to the hunter’s waist.

The artwork indicates that dogs were domesticated by at least 6,000 B.C., thousands of years earlier than previously thought, according to Science magazine. Before these findings, the earliest depictions of dogs on leashes came from a wall painting in Egypt that was around 5,500 years old.

“It’s truly astounding stuff,” Melinda Zeder, an archaeozoologist at the Smithsonian Institution National Museum of Natural History in Washington, D.C. told Science. “It’s the only real demonstration we have of humans using early dogs to hunt.”

Two archeologists, Maria Guagnin and Angela Perri, from Germany’s Max Planck Institute, cataloged about 1,400 carvings on sandstone cliffs in Shuwaymis and Jubbah, in northwestern Saudi Arabia. The carvings tell of humans entering—or re-entering—the region about 10,000 years ago. About 8,000 years ago the carvings show a shift to herding—the cliffs show scenes of cattle, sheep, and goats.

Just above the etchings of farm animals are a series of hunting scenes. The carvings show dogs attacking prey animals like ibexes and gazelles. In others, they are shown tethered to human hunters.

Researchers cannot put an exact age on the images. They can only estimate the age based on weathering and by the sequence of images showing the history of the people who made them.

The scholars’ best estimate is that the carvings are between 8,000 and 9,000 years old—which would make them the oldest depictions of dogs yet discovered, 1,000 years older than some pictures of dogs on Iranian pottery, previously the oldest images found.

Archeologist Melinda Zeder isn’t yet convinced about the age of the images, because “the archaeological record in this region is really spotty,” she told Science.

Paul Tacon, an archaeologist at Griffith University on the Gold Coast, Australia, told Science, “Dating rock art is often a guestimate.” But, based on his nearly four decades of studying such images around the world, he said that “their chronology is sound.”

“When Maria came to me with the rock art photos and asked me if they meant anything, I about lost my mind,” said Angela Perri, a student of skeletal remains of ancient dogs. Perri has argued that early dogs were critical in human hunting. “A million bones won’t tell me what these images are telling me,” she told Science. “It’s the closest thing you’re going to get to a YouTube video.”

One of the other exciting deductions the pair made was that dogs were trained to play different roles in the hunt. This could mean training overrode normal pack behavior—humans had domesticated the dogs to the extent that the humans were viewed as pack leaders.

Guagnin and Perri published their findings in an article, “Pre-Neolithic Evidence for Dog-Assisted Hunting Strategies in Arabia,” in the Journal of Anthropological Archaeology.

The dogs, they say, are similar to today’s Canaan breed, but it is impossible to tell at this time if the breed was imported to the Arabian peninsula from elsewhere or were a domesticated breed developed independently from Arabian wolves. The dogs might look similar because they had evolved in similar ecosystems.