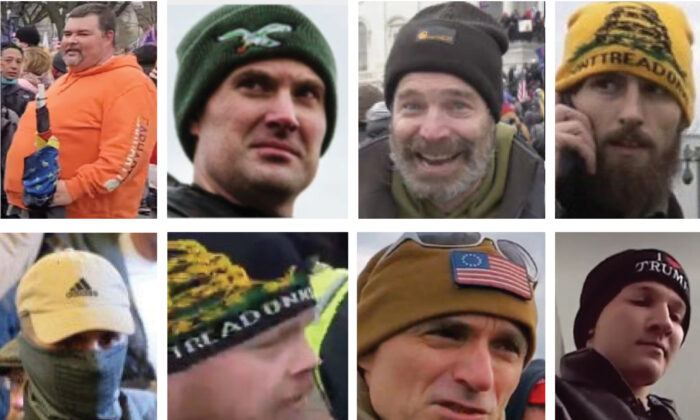 Defense attorneys are seeking to identify and investigate 80 “suspicious actors” and material witnesses, some of whom allegedly ran an entrapment operation against the Oath Keepers on Jan. 6, 2021, and committed crimes including the removal of security fencing, breaching police lines, attacking officers, and inciting crowds to storm into the U.S. Capitol.

In a motion (pdf) and supplement (pdf) filed after 11 p.m. on May 5 in federal court in Washington, attorney Brad Geyer listed 80 people, some of whom he said could be government agents or provocateurs. The people are seen in video footage operating in a coordinated fashion across the Capitol grounds on Jan. 6, 2021, the attorney alleged.

Geyer’s suggestion of an entrapment scheme will resonate with dozens of Jan. 6, 2021, defense attorneys, coming shortly after two men were acquitted of an alleged plot to kidnap Michigan Gov. Gretchen Whitmer, a Democrat. There was a hung jury on charges against two other defendants. The jury in that case was allowed to consider FBI entrapment as a defense.

Geyer, who represents Oath Keeper defendant Kenneth Harrelson, is seeking a court order from U.S. District Judge Amit Mehta compelling federal prosecutors to help identify the individuals and disclose whether they were working for law enforcement or any government agency on Jan. 6, 2021. Geyer wrote that the information is exculpatory, which compels the government to produce it.

Other Oath Keeper defendants are expected to join in the motion.

The May 5 filing comes on the heels of an April 12 Oath Keepers motion that alleged that at least 20 “assets” from the FBI and the Bureau of Alcohol, Tobacco, Firearms and Explosives were embedded in the crowd on Jan. 6, 2021.

According to the new filing, video evidence the defense gained access to only recently shows that some of the 80 people attacked police, other people, and members of the Oath Keepers; entered the Capitol on the west side “with apparent permission or acquiescence of government actors”; opened the Columbus Doors on the east side of the Capitol “from the inside, possibly with even further assistance of government actors”; and deployed “sophisticated crowd-behavior techniques,” orienting themselves between protesters and police.

“Often it appears that these communications devices do not seem to be affected by capacity restriction or sophisticated jamming that was evident throughout the day,” Geyer wrote in the motion.

“If it can be established that these SAs [suspicious actors] were government agents, this could amount to entrapment defense that will dispose of this 7th indictment prior to trial,” the motion says.

“If it can be established that SAs, even without established government agency, from the west or elsewhere, were let into the Capitol and/or were assisted in opening the Columbus Doors from the inside—a reasonable inference from video evidence—a reasonable jury might conclude that one or more SAs had government sponsorship.”

Eleven members of the Oath Keepers were charged on Jan. 12 with seditious conspiracy, obstruction of a government proceeding, and other counts. According to the government, the crimes were allegedly committed to prevent the certification of Electoral College votes for the 2020 presidential election.

Two Oath Keeper defendants of the original 11 accepted deals offered by prosecutors and pleaded guilty to seditious conspiracy and obstruction. Another Oath Keeper from North Carolina was charged on May 4 with the same counts and pleaded guilty on May 5. All three are expected to assist the FBI with its continuing Jan. 6, 2021, investigations.

Geyer suggested the Oath Keepers who entered the Capitol Rotunda through the famous Columbus Doors atop the east stairs were entrapped by suspicious actors who boxed them in and attempted to push them into the Capitol after the doors were opened from the inside.

Video footage shot by a French television crew and surveillance footage under court seal raise “significant concerns of informants, influencers, and inciters whose activities are now clearly observable,” a footnote in the motion says.

“The now observable behavior suggests the exact kind of specialized training, coordination, logistical support, timing, and common goals and objectives that the government attributes to the Oath Keepers,” Geyer wrote. “Conduct alleged against the Oath Keepers seems to have been perpetrated by others before the Oath Keepers were brought in front of the Columbus Doors.”

The new video evidence “not only exculpates defendant Harrelson and the Oath Keepers in compelling ways, it also shows a large group of SAs that actually carry out the crimes of which the Oath Keepers are accused and which is the centerpiece of the government’s case,” the motion said.

The many unidentified individuals in the court filing are referred to by the hashtag nicknames assigned by the Sedition Hunters website.

“James Dean Wannabe” stood on a column near the Columbus Doors and led “vicious attacks by SAs on police with chemicals and mace,” Geyer wrote.

As soon as the inner doors to the Rotunda opened, James Dean Wannabe stepped inside the door and began violently pulling protesters into the Capitol, the document said. He also helped to trap Oath Keeper James Dolan into a tight space with a Capitol Police officer, the report alleged. He was later seen on the east steps after changing clothes and removing his hat.

“Lemony Kickit” and “Lemon Zest,” both known for their colorful hats, appeared at the first and second breach points of the day near Ray Epps, the alleged provocateur who was captured on video on Jan. 5 and 6 imploring protesters to go into the Capitol.

Video also showed Lemony Kickit and Lemon Zest pushing at police and breaching the police line on the east steps before they moved up the stairs to the Columbus Doors.

Videos referenced in Geyer’s motion show that the 17-foot-high, 20,000-pound bronze Columbus Doors were closed when the crowd gathered at the bottom of the steps and then breached the police line. When the crowd reached the top, the fortress-like doors were still shut. It’s not clear when, or why, the doors were opened.

That significant revelation backs up arguments made in January by attorney Jonathon Moseley, who told prosecutors his client, Kelly Meggs, couldn’t have breached the doors because they are controlled from inside the Capitol.

The towering Columbus Doors that lead into the Rotunda on the east side of the U.S. Capitol are secured by magnetic locks that can only be opened from the inside by using a security code controlled by Capitol Police, Moseley wrote in an eight-page memo in January.

The two inner doors are secured by magnetic locks and can’t be opened from the outside. Twice within an hour on Jan. 6, suspicious actors opened the inner doors from inside the Rotunda, surveillance video shows.

According to Geyer’s filing, a large number of suspicious actors controlled the scene directly in front of the Columbus Doors after the giant doors were opened. They chased away regular protesters with pepper spray and moved other actors into place. The Oath Keepers, each of whom was shadowed by at least one suspicious actor, were positioned and coaxed toward the entrance.

“The dynamic of the crowd makes this almost invisible or fleeting to almost all publicly available camera angles, so most people in the crowd could not have known these chemical assaults occurred and certainly no one could have known who was standing on the steps which is where the Oath Keepers were positioned at exactly this moment.”

The net effect is that the Oath Keepers, who had come up the east stairs, were swept into the Capitol with the group of suspicious actors, the document alleged. The actors attacked police, breached the doors, and led a crowd inside the Rotunda.

Some of the video evidence referenced in the court motion was redacted from the document because it’s part of the more than 14,000 hours of video footage under a protective court seal.

The court filing will bring fresh attention to the issue of alleged provocateurs at the U.S. Capitol. Epps, a former Oath Keeper from Arizona, denies he was working as a government informant on Jan. 5 and 6, 2021.

Federal prosecutors announced earlier this year they would disclose more information about Epps, whose photo was removed from the FBI’s Jan. 6, 2021, most-wanted list. He hasn’t been arrested or charged, despite urging crowds to enter the Capitol and being present when police lines were breached by protesters.

Some of the suspicious actors on Geyer’s list were also seen in the hallway outside the Speaker’s Lobby, where Ashli Babbitt was shot at 2:44 p.m. on Jan. 6. There are a number of other unidentified individuals who stood near Babbitt before she tried to climb out of the hallway and was shot and killed by Capitol Police Lt. Michael Byrd.

Three witnesses to the Babbitt shooting were removed from the FBI’s most-wanted list in April 2021 without explanation. Those men haven’t been identified or charged.