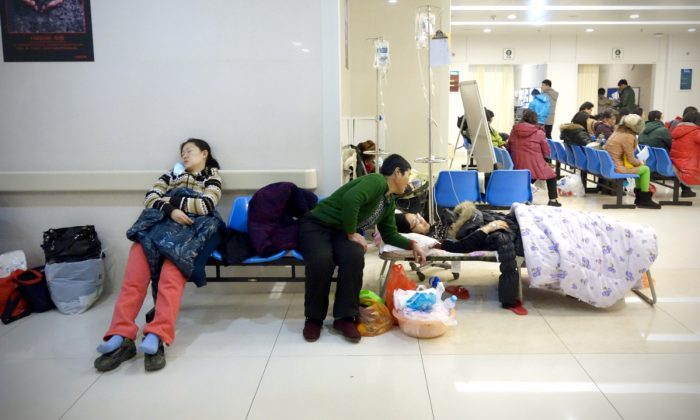 A father in China has not only beaten his son, but also attacked the child with a knife because the boy did not finish his homework assignments, according to the Beijing Youth News.

The boy, whose name was not given, will likely have to stay in the hospital for half a month, according to the doctors who tended to him.

The father, whose identity was not revealed, is suspected of abuse, the report said.

“Our hospital is taking care of an 8-year-old boy, his leg was injured,” a nurse told the Beijing Youth News. “Apparently it’s because he didn’t do his homework that he was hurt.”

The attack happened on Feb. 21 in Hunan, China while children were on winter break for the Chinese Lunar New Year. During holidays, homework assignments are given to kids of all ages, including those as young as 8.

When the father came home after school and learned that the boy hadn’t finished his assignments, the father demanded punishment. “I didn’t finish my winter homework. When he got home, he beat me,” the boy told the Beijing Youth News.

The boy was ordered to go through “kneeling punishment.” This means kneeling, often on a washboard, for a long period of time. Usually the hands will be held above the head to hold up a sign, upon which is written the wrong committed.

The boy’s paternal grandmother saw this, and begged the father to stop the punishment. This angered the father even more, and he grabbed a knife, frightening the grandmother.

The two then got into a struggle, and inadvertently the father cut the grandmother’s hand with the knife, but also hurt the boy as well, according to the report.

All the while, the child’s blood began pooling on the ground underneath himself. The father didn’t notice until the boy cried out and begged for forgiveness, being unable to endure the pain any longer.

The father immediately rushed him to the hospital. No explanation was given for the child’s bruising or fractured leg.

“There was a really big open wound on his leg,” a nurse told the Beijing Youth News reporters. “He’s going to be on a crutch for a while afterwards.”

The boy suffered a compound fracture on his lower left leg, the tendons and nerves were damaged, and there were bruises all over his body, according to the report.

The boy’s stepmother was also interviewed after the incident. She told the Beijing Youth News that educating the child was quite a headache.

“We make him go into his room to do homework,” she said. “But once you look away, he’s already run out of the room.”

The boy usually stays with either of his grandmothers, the stepmother said. “The grandparents really spoil him.”

She said that her husband’s mood is usually good and stable, but that he can become very irritated when it comes to disciplining his child.

“The boy’s dad is really regretful [for what happened],” the stepmother said. “When he saw that his son was hurt, his whole body was trembling [with fear], and immediately took him to the hospital.”